– A Delaware jury awarded a $2.86 million verdict last week to the family of Michael Galliher, who died from mesothelioma, a rare and aggressive cancer caused by exposure to asbestos fibers. Simmons Firm attorneys Randy Cohn, Conard Metcalf and Bill Kohlburn represented Galliher’s family, including his wife, sons and four grandchildren, against RT Vanderbilt In re Asbestos Litigation Michael Galliher, No. 10C-10-315 (Del. Super. Ct., New Castle City.). It is the largest asbestos verdict against a single defendant in Delaware in over a decade. 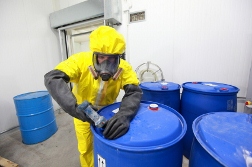 Michael Galliher, of Mansfield, Ohio, was diagnosed with pleural mesothelioma in August 2010. He died months later on Feb. 3, 2011 at the age of 62. While working at Crane Plumbing Fixtures Factory for nearly 40 years, Galliher used a talc powder contaminated with asbestos fibers to dust large molds of sinks, bathtubs and other ceramic fixtures. The asbestos fibers came from a mine in Gouverneur, N.Y., owned and operated by RT Vanderbilt Company, Inc.

“The magnitude of Mr. Galliher’s exposure is immeasurable,” said Cohn. “Like many Americans, he worked hard his entire life so he could enjoy retirement with his grandchildren. Instead, it caused him to be exposed to asbestos and develop a deadly cancer.”

Six years before his death, Galliher retired to spend more time with his grandchildren, family members said. His three local grandchildren would visit him and his wife almost daily. He taught them how to garden and play baseball. He would also take them on regular trips to a local lake or mushroom hunting. He passed away just two weeks shy of his 33rd wedding anniversary.

“This outcome is not about the money,” said Galliher’s wife, Darcel. “This is about the fact that a jury has held RT Vanderbilt responsible for its actions. We just hope no other family has to go through the pain and loss we have experienced.”

Founded in 1916, RT Vanderbilt is a mining and manufacturing company that sells more than sixty categories of minerals and chemicals used in over 800 products in industries including the rubber, plastic, petroleum, ceramic, cosmetic, and household products industries.

“No amount of money can replace these kids’ grandfather. However, his family can rest assured that the ones responsible have been held accountable,” he said.

About Simmons Browder Gianaris Angelides & Barnerd LLC
The Simmons Firm, headquartered in Alton, IL, is one of the country’s leading asbestos and mesothelioma litigation firms. With additional offices in St. Louis, Chicago, Los Angeles and San Francisco, the firm has represented thousands of patients and families affected by mesothelioma throughout the country. The Simmons Firm has pledged nearly $20 million to cancer research and proudly supports mesothelioma research. For more information about the Simmons Firm, visit http://www.simmonsfirm.com.