A mesothelioma victim who alleges her asbestos disease was caused by exposure to her late husband’s work clothes has seen her asbestos mesothelioma lawsuit revived after it was originally lost to a summary judgement ruling in favor of the defendant. 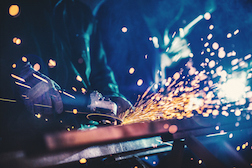 The allegation is not without precedent. There have been cases whereby the spouses of employees regularly working around asbestos have become ill, and in some cases have died from exposure to asbestos fibers piggybacking on the work clothes of the employee.

Court records did not specify the cause of Frank Beckering’s death in 2009. However, Wanda Beckering launched an asbestos cancer lawsuit against Shell alleging second-hand exposure to asbestos.

Beckering’s asbestos claims appeared to have gone south in 2014 when a trial court granted Shell Oil’s motion for summary judgement in March of that year. Eight months later, in November 2014 an appeals court upheld that ruling.

Beckering appealed to the state high court and found favor, thanks in part to a ruling in December of last year by the Supreme Court of California in Kesner v. Superior Court of California. That ruling by the Supreme Court determined that employers can be held liable for injuries caused by secondhand asbestos exposure suffered by household members of employees. The ruling addressed the potential for duty of care an employer has for family members who may be adversely affected through an employee.

Taking the lead from the Kesner finding, the state high court this past March vacated the ruling by the appeals court and sent the matter back to the appellate panel with instructions to reconsider Beckering’s case in light of the findings inherent with the Kesner decision.

Early last month the Second Appellate District Panel sent the case back to trial court with instructions to deny the motion for summary judgement moved by Shell.

That puts Beckering back at square one, but revives her asbestos lawsuit nonetheless.

More ASBESTOS MESOTHELIOMA News
“Beckering, whose husband was a Shell employee, was a member of the worker’s household and thus was ‘foreseeably in close and sustained contact with the worker over a significant period of time,’” the panel said.

Beckering filed her asbestos cancer lawsuit in August, 2013. The status of her health is unknown. However a diagnosis of Mesothelioma is usually a death sentence. There is no cure. Exposure to asbestos can result in asbestos disease, asbestosis or asbestos mesothelioma that usually emerges years, and sometimes decades following exposure.

The level of asbestos compensation sought by the plaintiff was not specified.

The asbestos injury case is Wanda L. Beckering v. Shell Oil Co., Case No. B256407, in the Court of Appeal of the State of California, Second Appellate District, Division Three.