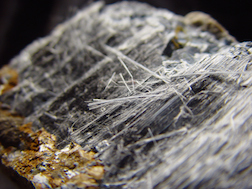 According to court documents, mesothelioma plaintiff Nicholas Dominick was an employee of Chicago Pneumatic and later, the New York State Department of Transportation. Dominick, who suffers from asbestos mesothelioma, held that while he was working in Chicago he was exposed to asbestos from bags and boards supplied to his employer by Pacemaker Steel & Piping Co. (Pacemaker) for various processes involving heat treatment.

While working in New York, the plaintiff asserts he was exposed to asbestos as a bystander from brakes and other vehicular components manufactured by Caterpillar Inc. (Caterpillar).

According to his asbestos cancer lawsuit, Dominick went after Caterpillar, Pacemaker, Millar Steel & Industrial Supply Co. Inc. for compensation. In mid-trial, in March of 2015 the plaintiff and Caterpillar settled in a deal that remains confidential. The trial continued with Pacemaker and other defendants, after which a jury awarded Dominick $4 million for his pain and suffering.

Pacemaker et al, which were assessed 30 percent liability for Dominick’s asbestos cancer, appealed the $3 million portion of the verdict for future pain and suffering which had been assessed to them.

In the end, an appellate panel in New York upheld the lower court ruling, finding there was sufficient evidence to support the original award. “Here, plaintiff’s expert opined that, if a worker sees asbestos dust, that is a ‘massive exposure ... capable of causing disease,’” the appellate panel said in their ruling released on April 28 of this year. “Contrary to the Millar defendants’ contention, the expert’s opinion, considered along with the rest of her testimony, was sufficient to establish specific causation.

“Asbestos in products [the Millar defendants] supplied was a substantial factor in causing or contributing to plaintiff’s injuries,” the appellate panel continued. “Plaintiff testified that he was exposed to asbestos dust from asbestos boards and cement supplied by the Millar defendants that were used in the heat treat area of a pneumatic-tool making plant.”

More DRUG AND MEDICAL News
Asbestos mesothelioma is a particularly harsh form of asbestos cancer and asbestosis that attacks the outer linings of the lungs and other vital organs. Exposure to asbestos, in most cases does not produce immediate symptoms, but rather asbestos fibers either inhaled or ingested can lay dormant for up to 30 years before finally emerging as asbestos cancer or mesothelioma. With the latter, causation is almost universally associated with exposure to asbestosis. There is no cure, and is universally held as a death sentence once a diagnosis has been confirmed.

READ ABOUT DRUG AND MEDICAL LAWSUITS