An asbestos lawsuit ruling by the Pennsylvania Supreme Court in February of this year translates to encouraging news for anyone diagnosed with incurable lung issues related to asbestos cancer and Mesothelioma. While the ruling is indigenous to Pennsylvania, the decision nonetheless creates a useful precedent. 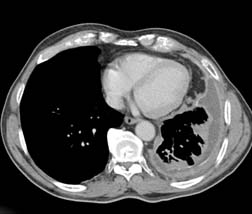 What it means for the patient is that filing for and recovering damages for a lung condition or disease related to exposure from asbestos in the workplace, does not preclude a plaintiff from making a claim years and often decades after the fact for a separate condition related to the onset of asbestos mesothelioma.

Mesothelioma is an asbestos cancer almost exclusively linked to asbestos exposure. The confusing aspect of asbestos mesothelioma is that the origins and building blocks of the horrific disease can lay dormant and go undetected for upwards of 30 years following exposure.

At issue is the so-called “two disease rule” observed by the State of Pennsylvania. The Supreme Court Justices in the lawsuit against defendants A.W. Chesterton and US Supply (Daley, v. A.W. Chesterton; U.S. Supply Co, et al.) ruled that filing an action related to an asbestos-related disease previously does not preclude a plaintiff from filing a subsequent claim years if not decades later, provided the subsequent action is based on a separate and distinct disease that was not known to the plaintiff at the time the first action was filed.

With asbestos cancer, mesothelioma often does not surface until years later.

Asbestos enjoyed widespread use throughout industry and manufacturing, including adoption for pipe insulation and as a fire retardant for ceiling and wall panels. Workers were often not apprised of the dangers related to asbestos exposure, toiling as they did in shipyards, railroads and other industrial environments without proper breathing apparatus or protocols related to mitigating exposure to and transfer of dangerous asbestos fibers on work clothes.

In Pennsylvania, any plaintiffs making asbestos claims related to exposure in the workplace, are not prevented from making a separate claim years later should Mesothelioma come into play.

More ASBESTOS MESOTHELIOMA News
There is no known cure for asbestos mesothelioma. Hence, the importance of asbestos compensation for workers or their surviving family members. And while the dangers of asbestos are well known today and its use has been scaled back, asbestos eradication from old buildings and other sites requires exacting protocols in order to preserve the health and safety of workers and passersby.

Asbestos fibers that remain isolated and undisturbed are thought to be relatively safe.
Building renovations, however, disturb those fibers and require expert asbestos eradication. When this isn't done properly, workers toiling directly on the site and even passersby are at risk of ingesting harmful dust and fibers, putting them at risk for asbestos injury.

In Pennsylvania, at least, a diagnosis of lung disease or asbestosis does not preclude a subsequent action for Mesothelioma decades down the road, so long as the asbestos mesothelioma was not known at the time of the primary action. With Mesothelioma, that's usually the case.