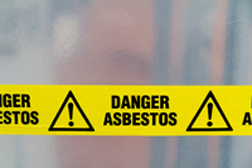 The study was published May 26 of this year in La Medicina Del Lavoro by researchers Candura, SM, et al. “Renal cell carcinoma and malignant peritoneal mesothelioma after occupational asbestos exposure: case report” relates the story of a 76-year-old cement worker exposed to asbestos through his employment. The man, who was not identified, had complained about a pain in his left flank.

At the Scientific Institute of Pavia in Italy, doctors diagnosed the man with renal cell carcinoma - the most common form of kidney cancer. In an effort to halt the spread of the disease, doctors removed the kidney.

However, 14 months later the man died of peritoneal mesothelioma.

“This is the second reported case of association between renal cell carcinoma and peritoneal mesothelioma in the scientific literature,” writes author Stefano Candura, whose name appears first on the article published in La Medicina Del Lavora. “Asbestos might be involved in the causation of both malignancies.”

Asbestos is a known carcinogen. Used for decades in everything from ceiling tiles to insulation wrapping, asbestos had been an oft-used product for its heat-dissipation properties. It was commonly employed as insulation. Exposure to asbestos, either in the form of asbestos dust or free-floating asbestos fibers, can result in asbestos mesothelioma and other forms of asbestos cancer that attacks the inner lining around organs such as the lungs, and can take upwards of 30 years to emerge.

Various asbestos claims assert that exposure to asbestos at the workplace, decades prior when asbestos was more widely employed than it is today, caused asbestosis and other forms of asbestos cancer. Asbestos compensation lawsuits assert that employers either didn’t know about the carcinogenic properties of asbestos (and should have), or knew about the dangers but failed to protect their workers from the risks. In some cases, family members of asbestos employees have died when their spouses introduced asbestos fibers into the family home via work clothes.

It has been reported that the World Health Organization (WHO) is of the view that as many as half of all work-related cancer deaths are attributed to asbestos.

It is not known if the deceased man’s family is pursuing asbestos compensation. However, even in the face of increased knowledge surrounding the health impacts of asbestos, the material is still used in some sectors - such as in some automotive brake products, as well as insulation popular in third-world countries.

While it was once felt that asbestos removal was Job One at all costs, the focus has now shifted against the disturbance of asbestos provided it remains contained - such as in the insulation of old buildings where the asbestos is out of harm’s way from any form of human contact.

When renovation or demolition requires that contained asbestos will be disturbed, an entire industry has been developed for the identification and safe removal of asbestos. It is when these expensive protocols are not followed that renovation workers - and even passersby - run the risk of asbestos exposure.

Were those exposures to happen today, the end result could be an Asbestos lawsuit, 30 years from now…

Posted by
Sheri Rettig
on July 10, 2016
My father passed away after his first round of chemo. He has malignant mesothelioma and likely renal cell carcinoma. He had a 2.5 cm neoplastic mass on his kidney.
Posted by
dorisene johnson
on July 3, 2016
I work in a manufacturing plant for 26 years when it close down their was asbestos in the plant I read it take about30 years to fine if you really have it and now I read its affect the kidney as I has suppected all along last year in 2015 I was dinois with kidneycancer had one remove I don't know whatcause it I never drink achole and never smoke the doctor said that they don't know what cause it I do believe it was due to asbestos can you help me in this case?
Posted by
Chester
on June 30, 2016
Asbestos related deaths continue year in year out. This is sad.

This fact that a second reported case of association between renal cell carcinoma and peritoneal mesothelioma should cause more and more focus on other unknowns that result from this exposure.