In perhaps the most compelling example of how deadly Mesothelioma can be, and how quickly it can kill, a former mechanic who was alleged to have inhaled asbestos dust while in the workplace died from asbestos mesothelioma just three months after his diagnosis. There was no opportunity for the victim, Pablo Gonzalez, to file asbestos claims. His surviving family did it for him. 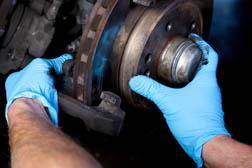 According to court documents, Gonzalez was a lifelong mechanic who worked on products manufactured by Caterpillar Inc. and Victor Gasket Manufacturing Co. (now owned by Dana Holding Corp). The plaintiffs in the asbestos lawsuit claimed that Caterpillar manufactured and vended machines that contained parts made with asbestos. The plaintiffs further alleged that Caterpillar sold those products from the 1920s through 1990, and while allegedly knowing that asbestos dust was toxic as early as 1959, the company failed to affix asbestos warnings to its products until 1984.

As for Dana Holding Corp., the company had purchased Victor Gasket Manufacturing Co., an enterprise that manufactured gaskets used in machinery. It is alleged by the plaintiffs in their asbestos claims that Victor had received customer complaints as early as 1970 about unacceptable levels of asbestos dust in gasket packaging, yet failed to place warning labels on gasket packaging until 1985 - fifteen years later. It is also alleged by the plaintiffs that Victor had developed an alternative to asbestos gaskets in 1980, yet continued manufacturing and distributing gaskets containing asbestos until 1988.

More ASBESTOS MESOTHELIOMA News
During closing arguments Friday (7/31/15) in a Miami court, the family asked for $19 million in asbestos compensation. “The reality is, it’s a simple case,” said attorney Marc P. Kunen, who represented the plaintiffs in the asbestos lawsuit. “Remember: It’s asbestos. They’re not going to say that it’s ever safe. It’s a deadly substance. It’s a known human carcinogen.

“If you breathe it, it’s going to kill you.”

The Gonzalez family asserted that warnings on products manufactured by Caterpillar and Victor/Dana failed to recommend the use of a respirator while working with the products, and failed to specifically warn against the possibility of asbestos cancer or death.

Pablo Gonzalez died in 2011 at age 79. The jury assigned to the case began deliberations in Miami July 31. As of August 3, there had been no verdict in the asbestos injury lawsuit.