An asbestos lawsuit has resulted in a $7.7 million award, after a school bus driver died from mesothelioma allegedly linked to his time working around school buses. Meanwhile, an asbestos injury lawsuit filed against a cruise line has also resulted in an award for the plaintiff. 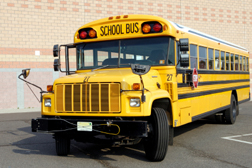 According to Syracuse.com (1/6/15), Lewis Nash worked as a school bus driver for Fayetteville-Manlius for 37 years. During that time, he was frequently in the bus garage where maintenance on school buses was performed. The lawsuit alleged that during those times, Nash was exposed to asbestos through brakes, clutches and gaskets, which later resulted in his development of mesothelioma. Nash died from mesothelioma in 2012 at age 81.

A jury found Navistar (maker of the school buses, now known as International Harvester) responsible for Nash’s mesothelioma and awarded his widow $7.7 million, including physical and emotional hardship.

A different lawsuit involving asbestos exposure was also recently found in favor of the plaintiff. According to Daily Business Review (1/7/15), Benedetto Emanuele Caraffa worked as an electrician on Carnival Cruise Lines for 15 years until 2000 and developed lung cancer in 2001. After he died, his family filed a lawsuit alleging the lung cancer was linked to asbestos exposure.

More ASBESTOS MESOTHELIOMA News
The lawsuit alleged that the ships Caraffa worked on were insulated with asbestos. A jury awarded the plaintiff $10.3 million, including pain and suffering and lost earnings. Because Caraffa had smoked prior to working for Carnival Cruise Lines, he was found 65 percent responsible for his lung cancer and the award was reduced to $3.6 million.

In addition to lawsuits concerning people who were exposed to asbestos while at work - such as navy shipyard workers, pipe fitters and furnace technicians - lawsuits are also being filed by people who experienced what is known as secondary or passive exposure. These include people whose loved ones worked with asbestos and who carried asbestos fibers home on their clothing, exposing their families to asbestos. People who experienced secondary asbestos exposure are also at risk of developing mesothelioma, asbestosis or lung cancer.