While asbestos lawsuits alleging patients developed mesothelioma from asbestos exposure tend to focus on exposure during employment in heavy industry, one report suggests another industry might have resulted in asbestos exposure. According to the authors of the report, a man who worked for a winemaker in Italy from 1960 to 1988 and later developed pleural mesothelioma. 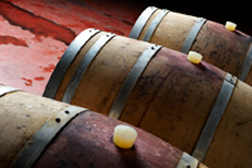 The report notes that the wine made at the wine farm was filtered, and that filter was “created by dispersing in the wine asbestos fibers.” The authors write that chrysotile asbestos was the only type of asbestos used in the filters. The worker would have been exposed to the asbestos either when mixing the fibers in the wine or when replacing the filter.

Although it would seems rare for a winemaker or employee on a wine farm to develop mesothelioma from asbestos exposure, the reports’ authors, Alessandro Nemo and Stefano Silvestri, note that eight cases of mesothelioma reported since 1993 have involved people who at some point worked as a winemaker. Of those eight, four did not use asbestos filters and were likely exposed during other employment, while the other four did use asbestos filters but were also exposed at other job sites.

The patient detailed in the Annals of Occupational Hygiene (10/8/14) is the first case of mesothelioma linked solely to employment as a winemaker.

More ASBESTOS MESOTHELIOMA News
Lawsuits have been filed against companies in a variety of industries, alleging employees were exposed to asbestos as a result of their employment. The lawsuits typically allege employers did not provide proper warnings or protective equipment to lessen the chances of asbestos exposure.

One such lawsuit was recently revived by a California appeals court, which found that a wrongful death lawsuit against Crane Co. should not have been dismissed. The lawsuit was filed by Robert Gottshall who died shortly after the suit was filed. It was then taken over by Gottshall’s daughter, Kimbra. The lawsuit alleged Robert Gottshall was exposed to asbestos during his time on US Navy vessels. A lower court granted summary judgment in favor of the defendant, Crane Co., but the appeals court reversed that decision.

The reversal means that the lawsuit will be sent back to trial court.

The lawsuit is Gottshall et al. v Crane Co., case number A136516, in the Court of Appeal of the State of California, First Appellate District.