Asbestos in Iowa: Was the Equitable Building a Health Hazard?

Asbestos has been on the minds and in the headlines in Des Moines in the wake of a redevelopment of the historic Equitable Building. At issue is the alleged improper handling of asbestos, and a risk for asbestos mesothelioma cancer, during renovations.

Asbestos, a known carcinogen whose use is tightly controlled and restricted, was at one time widely used in such things as building insulation. While asbestos poses little hazard if left undisturbed, it is often the subject of environmental concern when an older building is renovated. Asbestos removal has to be done carefully, in an effort to avoid exposing workers and the unsuspecting public.

Ironically, the environmental commissioner for the State of Iowa was planning on leasing office space at the historic Equitable building. In view of the current controversy and concern, Charlotte Hubbell, a lawyer and environmental activist, will wait until the asbestos allegations, if not the asbestos itself, comes out in the wash. 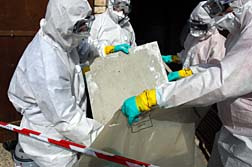 It was back in 2006 that developer Bob Knapp began the process of converting the historic Equitable building. The upper floors were to be converted into condos, while the lower floors would be reserved for retail space and offices.

All appeared to be well until September 6th of last year, when Polk County health officials received an anonymous tip concerning the alleged improper handling of asbestos at the site. The complaint was referred to the Iowa Department of Natural Resources.

Five days later an inspection of the site revealed asbestos-contaminated debris throughout the building, resulting in the eventual citation of the developer, who was seen to be in violation of seven statutes and regulations.

The Iowa Occupational Safety and Health department embarked on its own investigation about a week later, and delivered a formal notice of violation to Equitable L.P. October 5th. Among the stipulations of the notice, was the procurement and submission of waste shipment manifests and receipts for a period covering 18 months immediately prior.

Cut to January 15th 2008, some three months after the citation. Given additional time to compensate for the Thanksgiving, Christmas and New Years' holidays, inspectors discovered that there appeared to be no change in the status quo. A requested asbestos inspection was allegedly not done, and the requested manifests not provided.

State law requires that a formal inspection be done, and asbestos cleanup be carried out by a licensed contractor with expertise in the field, before work can resume at the site in question.

The developer maintains that the cleanup was conducted as ordered, and contends that no individual's health was compromised in any way.

The state resources department can levy a fine not exceeding $10,000 on its own, although the department's legal team supports a fine much higher than that amount, given the seriousness of the concern.

There are a number of ironies in this particular case, not the least of which is the fact that Charlotte Hubbell's husband Fred Hubbell is a former employee of Equitable. While the Hubbells were hoping to lease office space in the historic building, which has been standing since the 1920s, a lease has not been signed.

That frees her to participate in any due process against the developer according to her role as Environmental Commissioner for the State of Iowa, a position and view supported by the executive director of the Iowa Ethics and Campaign Disclosure Board, Charles Smithson.

In the meantime, the asbestos issue is a huge concern. Disturbed asbestos fibers, free-floating when not properly contained, can be inhaled and lie dormant in the lungs for years, before slowly emerging into mesothelioma cancer than can kill. Workers not properly protected, delivery persons not knowing the hazardous nature of the work environment, and even passersby can become exposed to mesothelioma.

More News
What's more, asbestos fibers can become embedded into fabric and on clothing, migrating to the families and loved ones of workers, and people unknowingly exposed to asbestos.

The maximum penalty for an air quality violation is $10,000 a day per violation, although fines are not typically levied for every day of a violation.

The Iowa Environmental Protection Commission, a governor-appointed panel, is expected to deliberate March 11th. At issue is whether or not to ask the attorney general's office to consider a higher-than-normal fine.

Meanwhile, the mystery at the Equitable building continues. Without proper documentation, state officials cannot verify if the required inspection was done, or the required asbestos cleanup, carried out properly.

As a result, the potential cost to human health is unknown.