Asbestos Mesothelioma: A Death Sentence Has Its Price

The family of a pipe fitter who has since died from an asbestos-related disease is launching a second lawsuit against a collection of 35 companies. The lawsuit was filed in May, and states that the defendants should have warned workers and consumers about the dangers of asbestos, and asbestos mesothelioma.

The late Ernest L. Edwards had earlier filed a lawsuit and received a settlement. However, subsequent to his death Edwards' family is suing with regard to "a different malignant asbestos-related injury" that the family claims resulted in Edwards' premature death. 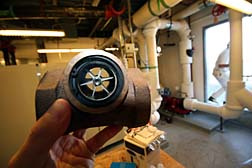 Those companies identified as defendants in the lawsuit are alleged to have knowingly manufactured and distributed products that contained asbestos, and requiring Edwards—a life-long pipe fitter—to carry out various tasks "which caused him to suffer from…industrial dust diseases caused by breathing the asbestos-containing products."

Another asbestos lawsuit, filed in late May, claims that plaintiff James Regal's "exposure and inhalation, ingestion or absorption of the asbestos fibers was completely foreseeable and could, or should have been anticipated by the defendants."

Regal, a machinist from Washington who was diagnosed with asbestos mesothelioma, toiled for the US Army from 1962 through 2003 throughout Illinois, as well as serving as a maintenance operative in a variety of areas. The plaintiff alleges he was exposed to deadly asbestos fibers through the course of his work, as well as the carrying out of home and automotive repairs.

Meanwhile an asbestos mesothelioma lawsuit heard before Common Pleas Judge Michael A. Della Vecchia at Allegheny County Court has resulted in a $7 million award to the family of Alphonse Tripoli, a 68-year-old Ross man who died six months after a diagnosis of asbestos mesothelioma. The man worked on and off as a union contractor in the Koppers building in downtown Pittsburgh beginning in 1968, as well as jobs at Dravo and Fisher Scientific. While all three job sites were found to have contained asbestos, it was argued that Koppers knew about the dangers but failed to inform, and protect Tripoli.

"Koppers failed to warn him or anybody what they knew," plaintiff's lawyer Rick Nemeroff said. "The dirty little secret Koppers was trying to keep finally came out. They knew, and I guess they just didn't care."

The jury award is somewhat complicated, given the complexities and nuances of the various defendants involved. Koppers Co. Inc was acquired by Beazer PLC in 1988 but later sold off. It was assessed 40 percent of the blame. Dravo Corp, itself acquired by Belgium's Carmeuse Group, and Fisher Scientific International Inc, which is part of Thermo Fisher Scientific Inc., were each assessed 10 percent. The outstanding 40 percent of liability is shared amongst a vast array of other defendants.

More News
It has been reported that an Allegheny County judge ruled in a separate lawsuit in 2006 that Koppers officials' knowledge of asbestos dates all the way back to the year 1918, when the company was a member of the National Safety Council.

Such is the pattern observed by several companies which, over the years, put their employees in harm's way by failing to protect workers from the hazards of asbestos, and failed to institute proper protocols and practices aimed at mitigating exposure for workers, and their families. Not only have workers themselves been put at risk, but also entire families, after a worker returns home wearing shop clothes laden with asbestos fibers.

More often than not, the hapless worker and his family had no idea.

But the employer knew…and did nothing.