Asbestos Exposure – Should You Be Concerned?

In 1974, Will got a job apprenticing in an electrical motor repair shop. Will worked for 11 years in that shop, in direct contact with asbestos. In those days asbestos was used to insulate motors and a host of other things, without concern. Now he has breathing difficulties and he's only 55 years old. Will wonders if he has asbestosis. 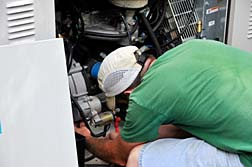 "Back then, we used a lot of asbestos as insulation for the electrics in the motors," Will said. "We're talking about electric motors that are power plant size – about 5000 horse power, and sometimes smaller. In order to disassemble a motor, we would burn off the exterior coat of varnish, and take the windings out and set them on an open flame burner. Then we could get the wire out. All the asbestos insulation would plume everywhere. Back then, we had no clue about asbestos – that it can cause cancer.

I went in as a trainee – which involved doing a lot of that stripping. That's the first thing you learn. I probably spent to 3 to 6 years learning how to do electrical stripping and that's what I did all day long. As I moved up and gained more experience, I began doing more technical things. Then another trainee would come along and he would get stuck doing the stripping. But I would end up doing it on overtime jobs, or if there were a lot of jobs on the go at the same time.

We also kept sheets of asbestos in the shop--we bought it by the sheet. We would break of chunks with our hands, mix it with water, and form a patty. If we had to do a welding job we would use these paste-like patties on both sides of a joint, and weld in the middle. The asbestos paste would prevent any burning occurring where it wasn't wantedb but we would have the paste all over our hands.

I think it was around 1985, when I was promoted into management, and I stopped doing that kind of work. So I had about 11 years of direct exposure. There were at least 100 others exposed to it while I was there--when I was in management I had at least 50 employees under me."

Will has seen some of his colleagues die of cancer, and he wonders if their illnesses were asbestos related. "I do remember several people who had lung-related problems," he said." A lot of people were exposed, and that's just one motor shop."
In the 1980s asbestos began to be banned, and these types of uses and work practices eventually stopped. But not the health problems. They were only just starting to surface.

More ASBESTOS News
Will is now suffering breathing problems. "I have recently noticed that I have occasional shortness of breath, like when I'm going up stairs, or doing physically demanding work," he said." It takes me a while to get my breath back. In my thirties I played on softball teams and I didn't have any problems at all. I still coach quite a bit, and it seems now that if I do a short run, I'm out of breath, and I have pain in my chest and back. Then I think I have to shape up – but I'm not out of shape, or overweight, and I've never smoked."

Needless to say, Will is concerned, and he's going to get tested. But he credits the information on LawyersandSettlements with helping to make him aware of the health issues he could be facing, specifically asbestosis and mesothelioma. "There are some very good articles on the Lawyers and Settlements site, and that's what spurred me to write in. The articles were so interesting, and fit me and my experience. I read most of them and got one heck of an education. I didn't even know I should be concerned, but I am now. "

Posted by
Vernon Timm
on March 20, 2014
Has he talked to a cardiologist lately ? I have those exact same symptoms and owned my own electric motor shop for 26 years, rewinding hundreds of motors, taking data, welding broken frames, and metallizing shafts. I went in for a yearly physical and found that my condition was not lung related but a condition known as ATF, atrial fribulation. And by the way, I am 76 years old. Get a stress test and talk to a cardiologist ASAP!!