Current and former oil industry employees, including mud engineers, who worked with asbestos drilling mud should be tested for asbestos-related disease and file a drilling mud lawsuit sooner than later. A number of asbestos mud workers have developed respiratory problems that may develop into a life-threatening disease such as asbestosis. 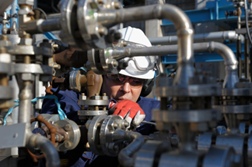 A number of people who were exposed to asbestos mud years ago and believed they were "out of the woods" are now complaining of breathing problems and other issues associated with asbestos-related diseases. Although mesothelioma can take decades to manifest, other asbestos lung diseases such as asbestosis can develop in a much shorter period and without years of exposure to asbestos. As the World Health Organization indicates, only "zero" exposure to asbestos is safe.

Andy (not his real name) says his health is "going downhill fast." He is suffering from chest pains, rashes, headaches and has difficulty breathing at times. "I worked with asbestos for four years on oil rigs in Louisiana and for Louisiana Mud," he says. "That was about 20 years ago, but because I am so short of breath now—and I'm only 50 years old—I am worried about asbestosis."

Asbestos attorneys advise anyone exposed to asbestos to request from their doctor a test for asbestosis and asbestos pleural disease with a high-resolution CT Scan and/or a biopsy.

Ken complained of chest pains but nothing showed up on X-rays. But on his attorney's advice, he insisted on further testing. Lo and behold, pleural plaques, which are an indicator of asbestos lung disease, showed up on a CT Scan. "I was exposed to the asbestos drilling mud over a period of about twenty years with companies such as Chesley Pruet Drilling Co., Espada Drilling, and ENSCO International, just to name a few."

Ken's attorney is looking at filing claims against all the companies that used asbestos drilling mud in their operations.

More ASBESTOS DRILLING MUD News
A CT Scan indicated that Randy has spots on his lungs. "I've had pneumonia eight times and it's getting harder and harder to take a breath," he says. "I can't hold a job because I cough so much. I'm only 57 and my health has prevented me from being gainfully employed. I mixed a ton of asbestos drilling mud in the Oil and Gas Industry and I worked as a mud engineer for over 20 years. I mixed asbestos from 1972 until they quit bringing it to my rig or warehouse—still they never told us why they quit using it."

Dave worked as a mud engineer from 1977–1984 in East Texas and mainly in the Gulf of Mexico. "I've supervised tons of asbestos fibers being poured into a mixing hopper, with no mention of any danger involved," he recalls. "There is no way these companies were unaware of the dangers of asbestos; they knew what was in that drilling mud."