"We Never Had Protection against Asbestos Drilling Mud"

"I remember Kenneth coming home from work covered in this asbestos drilling mud and I had to wash his clothes every day," says Patricia, Kenneth's wife. "This stuff even ate the thread out of his pants. If some of the asbestos mud got on my skin when I washing, it would immediately burn and get red." 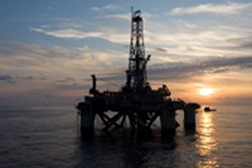 Fortunately, Patricia shows no signs of asbestos lung disease, but Kenneth hasn't fared so well. He began suffering from respiratory problems, including chest pains and difficulty breathing, about six years ago. And for a number of years he has had severe sinus infections to the point where he recently had surgery to remove a polyp.

Forty years ago Kenneth worked as a derrick hand for drilling companies onshore and offshore. He mixed asbestos mud for about 15 years, then at the age of 35 he changed careers and worked as a contractor for an engineering company—that move could have saved his life. But Kenneth isn't "out of the woods" yet: mesothelioma, which is directly linked to asbestos, can sometimes take 40 years to manifest.

"We had no safety gear and didn't know nothing about asbestos back in those days," says Kenneth. "We never wore safety glasses or masks; they only gave us work boots, a pair of overalls and a safety helmet. We were given a first-aid course but there was no mention of dangerous chemicals, including asbestos, which we were mixing into the drilling mud."

"This asbestos mud was very thick and slimy and smelled bad," says Patricia, who often had to rinse her husband's clothes outside with a water hose before she put them in the washing machine—it was sometimes that thick, depending on whether he was drilling or moving the pipe.

"One time a mud tank blew up on him; Ken came home covered in mud and I thought it was a swamp monster—he scared me to death coming through the door," says Patricia, laughing. "All I could see were two blue eyes. 'I quit,' he told me. Ken stopped working for that particular drilling company, but every drilling company he worked for afterward used the same products to mix their mud with.

"I noticed Ken's health problems after he started working on the power lines. He was having trouble breathing and couldn't take the heat like he used to—now he can't handle the heat at all. He has rashes that won't go away. Then he began to have respiratory problems and he saw a pulmonary specialist—he had red spots on his lungs. They thought it was the 'flu' but he didn't have any flu-like symptoms. Then they said it was 'maybe' scar tissue. Then he had multiple sinus problems and had his sinuses stripped last year—he was always getting nosebleeds.

"His ear, nose and throat doctor said this was the worst case of sinus infection he had ever seen. A polyp developed in Ken's nose and it had been there quite sometime—it's hard to get him to the doctor. Asbestos drilling mud is the only thing we can think of that could cause this—that's my reckoning.

"Our friend is still a driller and he sits in an air-conditioned room to mix the mud these days," says Kenneth. "Now the mud is pre-mixed in huge containers and it's computer-dumped—it's all automated with a joystick. It sure ain't old school anymore; there are no more roughnecks on the floor…"

Patricia says Kenneth has ongoing problems with his sinuses and so far has only had X-rays of his lungs. "If this asbestos mud damaged his health then he has to be compensated," she says. "These huge oil companies just run over everyone and do what they want to do; they even tell the president what to do down here…We live about 150 miles from the coast but you could smell the BP oil spill burning from where we live.

More ASBESTOS DRILLING MUD News
"There are times when Kenneth can't get a good breath; he was always very strong and he's only 61, but with any exertion he gets out of breath. His heart is beating just fine—it's his lungs we are concerned about.

"I knew nothing about asbestos drilling mud lawsuits until I went online looking for an attorney in another, unrelated case. I ran across oil-field-related lawsuits, then I questioned my husband—that's when it hit me—his respiratory and sinus problems are linked with the asbestos drilling mud. If you could have seen how he suffered over the years with sinus problems, in and out of the doctor, steroids and antibiotics, but they are all temporary fixes. The doctors never could heal it nor could they explain why he has these problems. They say it couldn't have been genetic but no one in his family had anything like this. What will happen to him next—asbestos lung disease?"