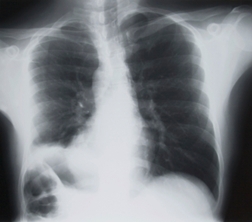 The majority of Stewart's asbestos mud clients have an asbestos-related disease such as asbestosis, which means your breathing has been affected by scarring in your lungs as a result of asbestos exposure. It is also a life-threatening condition similar to emphysema—it can also lead to mesothelioma.

Stewart says there is not a ruling by a judge that says you must have a biopsy. An x-ray will show a scarring pattern on your lungs, but in court, x-ray results could be argued as caused by something else, such as pneumonia or smoking. So if you get a biopsy, there is no question in court.

"However, we are still accepting clients who don't have cancer but who have objective findings of scar-encapsulated fibers in their lungs," adds Stewart. "For people who have encapsulated asbestos in their lungs, the compensation level would not be the same as someone diagnosed with asbestosis; they may not develop a fatal form of cancer such as mesothelioma. And you can only bring a claim once, so some people will settle for a lesser amount and will develop cancer and they won't be able to bring a claim."

Meanwhile, $322 million, one of the largest asbestos awards to date was awarded to an oil field worker exposed to asbestos fibers in drilling mud. Stewart points out that this case is most interesting because, not only did the jury award such a huge amount, but the reason why the award was so great: a hand-written note written by one of the defendants showed that, due to a cost-benefit analysis, it was decided to give people cancer as long as the profit exceeded the cost of the lawsuits that would follow.