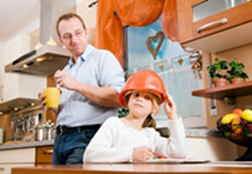 Because mesothelioma and asbestosis can take decades after exposure to develop, those conditions are often associated with older patients. But for people who grew up with parents who worked around asbestos - such as those who worked in construction or mixed drilling mud - the onset of asbestosis and mesothelioma can occur at a younger age.

Express-News (12/1/14) recounts the story of Stephanie Harper, whose dad worked around asbestos. At the age of 22, doctors discovered she had a tumor and linked that tumor to fibers in her lungs. Now 37, Harper has mesothelioma and lives in daily pain. She never worked with asbestos, but because her dad did, she suffered secondary exposure, which was enough to trigger the serious health condition.

Asbestos is not illegal, but there are laws designed to protect the people who work with it, and those who might be exposed to it in their environment. Patients who were exposed to asbestos have filed lawsuits against a multitude of companies in a variety of industries, alleging those companies were negligent in their use of asbestos, or failed to properly protect workers from the carcinogen.

While critics continue to fight to get asbestos banned, some states are making it easier for plaintiffs to file lawsuits to hold those responsible for their asbestos exposure accountable.

More ASBESTOS DRILLING MUD News
Illinois has just approved an extended statute of limitations for patients seeking to file an asbestos lawsuit. The state recently voted 70-43 to remove the time limit currently imposed on lawsuits linked to asbestos in building construction. Patients currently have 10 years to file a lawsuit, but experts maintain that mesothelioma and other health problems can take up to 20 years after exposure to appear. According to the Associated Press (12/4/14), opponents argue that the bill expands liability for businesses and discourages new businesses from setting up in Illinois.