Possible Link between Asbestos and IPF

People who worked with asbestos drilling mud and other products that contained asbestos might already be well aware of the potential for serious health problems such as asbestosis and mesothelioma. A new study from England and Wales suggests asbestos exposure might also be linked to idiopathic pulmonary fibrosis (IPF), according to Medscape (9/15/14). Although no relationship between asbestos and pulmonary fibrosis has been proven, researchers suggest their findings could result in new treatment for patients exposed to asbestos. 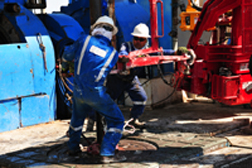 According to the National Heart, Lung, and Blood Institute, IPF is a disease that involves lung tissue becoming thick and stiff, which prevents it from properly moving oxygen into the bloodstream. This lack of oxygen in the bloodstream means that the brain and other organs do not receive proper oxygen. When there is no identifiable cause of the pulmonary fibrosis, it’s referred to as “idiopathic.”

IPF is more common in middle-aged and older adults. Its onset can be quick or slow but there is no cure and many people live three to five years after diagnosis. Causes of death linked to IPF include respiratory failure, pulmonary hypertension and heart failure.

Researchers in Europe examined mortality information from England and Wales to see if there were any connections between IPF, asbestosis and mesothelioma mortality rates from 1974 to 2012. They found correlations between the three diseases. Researchers noted that high rates of death linked to IPF occurred in regions that could have higher unknown exposure to asbestos.

“The findings are consistent with the hypothesis that a proportion of IPF cases are likely to be caused by unknown exposure to asbestos,” said lead researcher, Dr. Carl Reynolds. “More research is needed in this area, particularly as patients known to have asbestos exposure are not currently considered to be candidates for new treatments for IPF and this may be inappropriate.”

More ASBESTOS DRILLING MUD News
According to a press release from the European Lung Foundation (9/9/14), IPF and asbestosis can have identical symptoms, but a diagnosis of asbestosis is given when the patient knows he or she was exposed to asbestos. This means that some patients diagnosed with IPF may have unknown asbestos exposure, which could change their diagnosis to asbestosis.

The results of the study were presented at the European Respiratory Society’s International Congress.

According to Medscape, the next study will examine asbestos exposure in patients with IPF, to see if there is a relationship between the two.