A notable example of the kinds of allegations various enterprises are facing with regard to asbestos drilling, and health issues faced by plaintiffs after alleged exposure to asbestos through contact with drilling mud, is the sizeable lawsuit filed back in the summer involving a host of plaintiffs and defendants. 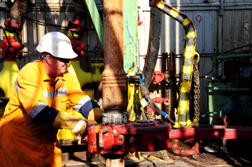 And if one is ever to wonder why the term “et al” is so often used to describe specific lawsuits, it is due to the numbers involved. To wit: Bridges et al v. Chevron Phillips Chemical Company, LP et al (No. 3:2013-cv-00477, in the US Court for the Middle District of Louisiana) is a lawsuit that features no fewer than 10 plaintiffs and 12 defendants.

The allegation: that the various defendants exposed the plaintiffs to asbestos contamination through the mixing and use of oil drilling mud while employed on oil rigs spanning two decades, according to court documents.

Specifically, the plaintiffs allege they developed health issues related to asbestos exposure while employed on oil rigs located throughout the Gulf of Mexico. The lawsuit alleges that the defendants that manufactured the oil drilling mud and sold it to drilling rig operators knew about the health hazards related to asbestos exposure, but failed to warn potential users of the hazards.

“Defendants had actual knowledge of the significant danger associated with their products, but they nevertheless sold raw asbestos drilling mud additives in 50-pound bags for use by oil field workers like plaintiffs in the oil and gas drilling industry from 1960s to 1980s.”

Drilling mud is integral to the drilling process. It helps to cool the drilling apparatus and prevent ruptures. The mud is usually mixed on-site from a powdered concentrate. Many a mud engineer stricken with asbestosis has described working in a haze of dust, unaware that they were inhaling and ingesting asbestos fibers. Asbestos is a known carcinogen, yet was widely used in industrial settings due to its insulating properties.

Workers have toiled for years without realizing they had a drilling mud problem until decades later. Asbestos is known to incubate in the body and lay dormant for up to 30 years, before emerging as asbestos cancer or mesothelioma. There is no known cure.

In November, a Motion to Dismiss put forward by defendant Shell Oil Co. was granted, in part, to require plaintiffs to file amended petitions clarifying the factual basis for each claim under the Jones Act against the defendant. All other aspects of the Motion to Dismiss were denied by Magistrate Judge Stephen C. Riedlinger on November 22nd of last year. Plaintiffs and their legal teams had about two weeks to comply.

More ASBESTOS DRILLING MUD News
In the meantime, mud engineers having worked closely with oil drilling mud in the past are watching their health carefully; fearful of what may lie ahead…

Plaintiffs in the drilling mud lawsuit are seeking future lost wages and benefits, past and future medical expenses, damages for pain, suffering and moral anguish, emotional distress, fear of cancer, and punitive damages.