Toxic drilling mud has the potential to harm more people than the mud engineer who comes into direct contact with the substance. And while the drilling rig employee carries the most risk of inhaling floating asbestos fibers when drilling mud is mixed from its original powdered form, it’s what happens after the drilling mud is spent that has many residents of the Central Valley area of California concerned. 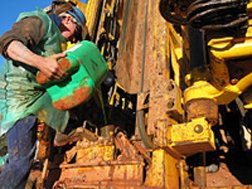 That all changed when various environmental and consumer groups advocated to have the waiver struck down. And according to a news release issued by The Center for Biological Diversity (12/5/13), this has now occurred, with the agency voting 4-1 to allow the waiver to expire. The suggestion, as a result, is that oil and drilling companies will now have to adhere to the same regulations and reporting protocols that apply to other types of waste discharge, according to the report.

But it does not suggest an end to the dumping. And thus, will a drilling mud problem that has affected many a mud engineer having come into close contact with asbestos drilling mud be seen as transferring to a wider segment of the population through groundwater?

However, according to the report, drilling mud properties can include heavy metals such as aluminum, mercury, cadmium, arsenic, chromium, copper, lead, nickel and zinc, as well as radioactive materials like radium.

What’s more, according to the report, exposure to these drilling mud additives has the potential to damage the skin, eyes and other sensory organs, liver, kidney and brain, as well as the respiratory, cardiovascular, gastrointestinal, immune and nervous systems.

More ASBESTOS DRILLING MUD News
The concern now is that these chemicals, all part of drilling mud composition, have been slowly leaching into groundwater in the California Central Valley.

The water authority agreed it needed to end the waiver, together with its previous hands-off approach to the dumping of toxic drilling mud, and to study the potential for environmental damage that can result from the discharge of drilling mud chemicals.

Posted by
Jack
on December 22, 2013
They should keep it in their own neighborhood.
Do the people near the dumpsites get helped or paid? Not the state but the people that will be forever affected by the toxic waste. Who will spend all the money once we are all dead? Quit electing and believing liars!
Posted by
Itachee
on December 13, 2013
Wide swaths of the west side of the San Joaquin Valley south of the Panoche Fan have soils that contain large amounts (10-12% by volume) of long fiber asbestos, a naturally occurring element in the coast range mountains. This issue is nothing more than ambulance chasing by attorneys.