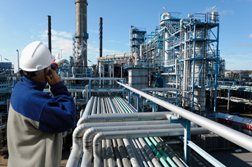 The Associated Press reports that the 19 companies are being fined millions of dollars in total. The director of the state's Department of Mineral Resources, Lynn Helms, told the news source that 47 waste ponds had ultimately been swamped due to meltwater stemming from an extremely snowy winter in the area.

According to the National Weather Service, the town of Williston, which is located in North Dakota's oil patch, received nearly 100 inches of snow during the winter, exceeding the 1895 record of 95 inches.

Helms told the news source that due to the lack of action taken to prevent the spills, five of the sites will be fined more than $500,000 a piece.

"Their response to the cleanup also was very slow or inadequate," Helms said.

Dennis Fewless, the director of water quality for the state's Health Department, told the news provider that the runoff coming from waste pits after flooding can potentially include diesel, oil and drilling mud chemicals. Still, Fewless added that sources of drinking water had not been compromised by the spills.

"Having said that, there will be a continual process of testing," he explained.

Representatives for Hess, who have previously said that less than three barrels of drilling mud chemicals had flooded into nearby Lake McCleod, did not immediately return calls made by the news source.

More ASBESTOS DRILLING MUD News
Elsewhere, in New York, the state has decided to sue the federal government claiming it did not sufficiently study the potential negative effects that natural gas "fracking" could have on millions of people, reports USA Today.

According to the news source, drilling mud chemicals and methane have reportedly contaminated some sources of drinking water during such "fracking," but many experts have said that the potential risks of the pollution are not very high.

New regulations proposed by the Delaware River Basin Commission call for the drilling of 15,000 to 18,000 gas wells in the basin without full reviews being conducted. The regulations have reportedly been supported by the federal government, leading New York's attorney general to file the lawsuit, the news source said.