Jay Strosberg: The Attorney Behind the Ticketmaster Lawsuit

Back in the day, before the Toronto Maple Leafs hockey team moved to the Air Canada Centre, shady characters would stand outside the old Maple Leaf Gardens on game night, puffs of frosty breath floating in the chilly air as they barked, "Golds, Golds, Blues, Blues" referring to the color-price coded seats inside the historic arena. 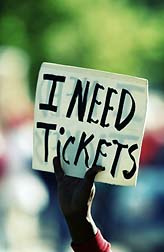 Attorney Jay Strosberg from Windsor, Ontario remembers them well. "I don't like the word scalper," he says referring to people who flip tickets at inflated prices, outside big concerts and sports events, but that's what most people called them then and still call them today. They're at almost every concert venue. By tradition, they're a rat bag of street level entrepreneurs who've bought a couple hundred dollars worth of seats to Celine Dionne or Coldplay and hope to double their investment by selling to latecomers.

Ticket scalping is illegal in Ontario, Canada and in many other places, but it was largely ignored because it was unorganized and it seemed to serve the purpose of some.

But then came the internet and a company called Ticketmaster and lawyer Jay Strosberg. "Well, we are at the beginning, we are commencing several actions across the country and are still in the process of consolidating the Ontario action and preparing our certification materials," says Strosberg. In other words, he's launching a class action against Ticketmaster for allegedly, as he sees it, selling tickets online at hyper-inflated prices.

Strosberg, from the firm Sutts, Strosberg (Windsor and Toronto) is proposing two class actions against Ticketmaster, TicketsNow and two other Ticketmaster companies on behalf of all persons who purchased tickets after February 9, 2007.

The Ticketmaster lawsuit contends the companies routinely contravene Ontario's anti-scalping legislation. "We allege that these companies are not in compliance with the legislation in Manitoba, Alberta and Ontario based on our information," Strosberg says from his Windsor office on the Canadian side of the Detroit River. "There are many US states that have laws against this as well."

The plaintiffs in the suit allege that Ticketmaster has and continues to deliberately limit the number of tickets that are sold in the primary market at face price and instead, diverts tickets to its secondary market TicketsNow website where they can be sold for amounts that exceed their face value.

"When we went public with our lawsuit, our office was overwhelmed with calls, and emails and registrations on our website. Sutts, Strosberg is one of the pioneering law firms in the area of class action and litigation in Ontario.

More ANTITRUST News
"There are thousands and thousands of people out there who buy tickets everyday so I would suspect there are a large number of people that have been affected," Strosberg adds. "I think this practice should be stopped."

The suit will ask that people who bought tickets be compensated for the difference between what a regular ticket would cost and the price paid.
It could amount to an estimated $500 million.

By the way, Ticketmaster says it has done nothing wrong.

Posted by
shawn labadie
on June 24, 2016
ODERED TICKETS FROM TICKET MASTER AND HAVE NOT RECEIVED ONE VOUCHER AND NO TICKETS. WHAT DO I DO?.THANK YOU
Posted by
admin
on November 1, 2012
Hi Dianne, Any correspondence regarding the Ticketmaster settlement most likely came from the claims administrator for the class action lawsuit, not from LawyersandSettlements.com. Your best bet would be to refer to the claims administrator's website, where you'll find information about this class action settlement, and also some contact information for further questions. Here is that website: http://www.ticketfeelitigation.com/
Posted by
Dianne Roy
on October 30, 2012
The last notice I received from your company indicated that payment would be forthcoming around June 2012. This is October 30 2012. Why is there a delay?