In what is believed to be the largest penalty ever delivered in an antitrust case, the European Commission today slapped computer chip maker Intel a record $1.45 billion fine for abusing its market dominance in a bid to shut out rival AMD, according to a story this morning in the New York Times. 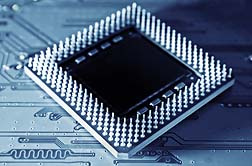 "AMD is properly known as Advanced Micro Devices, but is commonly known as AMD. Any owner of a PC containing the AMD chip would be familiar with the AMD logo.

However, users of PCs containing the AMD chip are in the minority, as AMD commands only about 20 percent of the global chip market, according to sources. The remainder belongs to Intel, which enjoys a whopping 80 percent of the chip market and runaway dominance in the integral computer chip arena.

Eighty percent was just enough for Intel, it seems—as the company was accused of various efforts and practices to ensure that rival AMD did not advance beyond its meager 20 percent share of the market.

Those strategies are said to include offering rebates to computer manufacturers. Such rebates says Neelie Kroes, European Union Competition Commissioner, served to keep Intel clients with Intel and in so doing preventing AMD from advancing its share of the market beyond 20 percent.

Intel, "used illegal anticompetitive practices to exclude its only competitor and reduce consumers' choice," said Kroes, "and the whole story is about consumers." She added that Intel's practices "undermined innovation."

According to Kroes Intel's primary strategy was to utilize its huge financial clout to entice computer manufacturers and retailers with cash to bail on AMD—either through the postponement of AMD orders, cancellation or complete avoidance of Intel's rival.

Kroes ordered Intel to immediately stop the issuance of rebates.

As big as the fine was, it could have been bigger. The European Commission has the right to levy fines up to a maximum 10 percent of a firm's annual, global sales. Last year Intel raked in $37.6 billion, which would have left it with a potential liability of $4 billion in fines. A fine of $1.45 reads like a warning, in comparison to what it could have been.

Intel is expected to appeal, although the company offered no comment. Various appeals and potential injunctions could keep the case from being conclusively decided for years, so it's quite possible that a final outcome could be stalled for some time.

However, the antitrust fine against Intel must be paid up-front, even before any potentiality for appeal has a chance to begin. The New York Times reported this morning that the fine could be held in a bank account until the appeals process, if it occurs, runs its course. However it was not reported who would control the bank account—Intel, or the European Commission. Nor was there any word as to who would own the interest earned from such a large sum of money sitting in an interest-bearing account.

More Antitrust News
Intel was accused, through two sets of charges in 2007 and 2008, of abusing its substantial market dominance over AMD by issuing large rebates to manufacturers, making payments in exchange for the delay, or cancellation of rival product lines, together with the offering of chips to manufacturers of servers at prices below cost.

Giuliano Meroni, the president of AMD's operations in Europe, said the decision would "shift the power from an abusive monopolist to computer makers, retailers and above all PC consumers."

The Intel fine was the largest levied by the European Commission (EC) since 2004, when it tagged Microsoft for $677 million (2009 dollars) for antitrust activity that involved the blocking of markets for servers and software.

It was in 2000 that AMD first filed a complaint with the European Commission against Intel. EC regulators began investigating Intel a year later.
READ ABOUT Antitrust LAWSUITS