Expert Notes Amusement Park Accident Could Have Been Avoided

A tragic amusement park accident that occurred at a recent fair in Shreveport, Louisiana, may have been preventable, according to a safety expert, KTBS News reported. 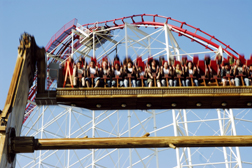 Coaster-Net reported the accident occurred while the operator was helping children get off of the ride as another child hit the start button, causing the structure to start moving. This led to four-year-old Sheldon Lewis getting trapped between the moving cars.

According to the news source, firefighters arrived at the scene and were able to extract the young boy from the ride, but he is currently in critical condition due to the injuries that he allegedly suffered.

Although the injury was sustained by the young boy and the error was pointed out by both the authorities and the fair coordinators, no charges have been filed due to the fact that the ride had recently passed three safety checks, according to the news source.

Ken Martin, an amusement park safety consultant and analyst in Virginia, told KTBS News that this event shouldn't have occurred, as the proper preparation and instruction may have prevented the accident.

"It's the operator's responsibility to see that that ride is operated properly, and as long as it's in his control, that's his job," Martin told KTBS.

More AMUSEMENT PARK ACCIDENT News
He noted that there are several factors at play when considering why a specific ride or structure might not be built with a switch that only allows the operator to control it. He placed state regulations at the top of the list for these factors.

"Sometimes when a ride is used in states that have limited oversight or regulations, sometimes they just don't always get checked properly to ascertain that the ride is being operated properly," Martin told the news source.

According to KTBS, Martin emphasized there is plenty of data to show that the ride should never have been "accidentally" started like it was in the incident.

"Inherent in the safety of all amusement rides is that the rides do not start inadvertently or stop inadvertently," Martin told the news source.

If you or a loved one have suffered losses in this case, please click the link below and your complaint will be sent to an accidents lawyer who may evaluate your Amusement Park Accident claim at no cost or obligation.
Request Legal Help Now