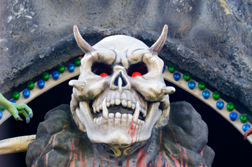 As reported by ABC News (10/31/11), the accident happened at Creepyworld, a Halloween attraction in Fenton, Missouri, and involved a 17-year-old girl who was working at the attraction. The young victim reportedly slipped off the edge of a tub with a prop noose around her neck. When she was found by coworkers, the girl was unconscious and hanging from the noose.

The victim was hospitalized in the Intensive Care Unit but her condition has since improved. It is not known if visitors to the attraction may have witnessed the accident but thought it was part of the show. The Associated Press (11/02/11) reports that the girl was found by another teenage employee and a maintenance worker, who cut her down from the noose and performed CPR to revive her.

STLtoday (www.stltoday.com; 10/29/11) reports that the Creepyworld attraction is designed to look like a small town disaster zone, including fake bodies, car wrecks and actors designed to scare park guests. The park is operated by Halloween Productions Inc., a company that runs other haunted houses in the area.

More AMUSEMENT PARK ACCIDENT News
According to the Today article, the haunted house industry makes about $6 billion and involves approximately 2,500 attractions around the world. An organization called Haunted Attraction Association has designed a voluntary safety program for haunted house attractions, although Creepyworld is reportedly not a member of the Association.

Halloween Productions has faced lawsuits related to another park, called The Darkness. One lawsuit alleged that a 15-year-old girl with asthma died after being exposed to artificial fog and other scents at the attraction. The young victim reportedly died in 2010, after a year in a vegetative state following her visit to the park. Meanwhile, a separate lawsuit alleges that a visitor to the same park suffered a severe brain injury when a fight occurred among people waiting to enter the theme park.