For people who go on amusement park rides, worries about the risk of an amusement park accident are generally small. After all, fun-seekers would not go on rides if they thought there was a high risk of a horrific theme park accident or roller coaster accident. Even for rides that might carry risk of a small amusement park injury, such as bumper cars, concerns about those injuries are minor and usually not enough to prevent a person from enjoying the rides. 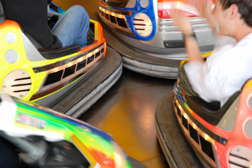 Just from watching people on the bumper cars, a person can get the sense that there is a real risk of whiplash and other neck injuries, due to the jostling and bouncing around the cars do. Still, most people are able to ride the bumper cars without serious incident. One doctor, however, was recently told she could sue the owners of a theme park if they were negligent in allowing head-on collisions on the bumper car ride.

More AMUSEMENT PARK ACCIDENT News
According to the Mercury News (06/10/11), the plaintiff, a doctor, suffered a fractured wrist while on the bumper car ride. The wrist was reportedly fractured in a collision in which the plaintiff was hit first head-on and then immediately after, from behind. The doctor reportedly used her hand to brace herself, resulting in the fracture. The lawsuit was originally thrown out of court by a Superior Court judge who found the park did not owe a legal duty to guarantee against a fractured wrist. The court of appeal, however, found that a jury would have to determine if the theme park owner was negligent in not preventing head-on collisions on the bumper cars.

The court noted, "Although bumping is part of the experience of a bumper car ride, head-on bumping is not. In fact, it is a prohibited activity."

The ride on which the doctor was injured reportedly now has an island in the center, to ensure drivers move in the same direction and to minimize the risk of a head-on collision.

Meanwhile, an investigation by The Orange County Register revealed that there were 284 reports of incidents that required medical attention on rides in Orange County. Those injuries included torso and spinal injuries, cuts and bruises, and rib injuries and broken teeth. None of the injuries was fatal.