An 11-year-old girl from Atlantic County, New Jersey, died in a recent amusement park accident after she fell from a Ferris wheel during a school trip, reports the Philadelphia Inquirer. 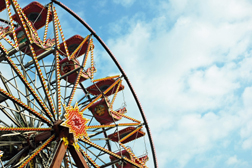 According to the news source, Abiah Jones traveled to Morey's Mariner's Landing pier with her classmates from PleasanTech Academy Charter School. Jones reportedly fell from the 156-foot high ride just after noon on June 3, the news provider said.

Harrolt Butron, who was at the park at the time of the accident, told the news source that the girl landed on a metal platform underneath the ride, and resuscitation attempts proved unsuccessful.

"Everyone came over," Butron, a Puerto Rico native, explained in Spanish. "They tried to do CPR," but the girl remained still, he added.

Another park patron, Donnalee Landwher, told the news source that she knew it was a grave emergency when she saw medical personnel working on the girl.

"When I saw them doing chest compressions, I knew it was bad," Landwher said. "I knew they were trying to revive somebody and it wasn't going to happen."

Police from Wildwood, New Jersey, where the amusement park is located, said that Jones was pronounced dead at Cape Regional Medical Center less than one hour after the incident occurred, according to the news source.

More AMUSEMENT PARK ACCIDENT News
Wildwood Commissioner of Public Safety Anthony Leonetti explained that while the girl was by herself in one of the ride's 40 cars when she fell, it had not been determined whether or not the ride was in motion at the time or how far the girl actually fell.

Hollie A. Gilroy, a spokeswoman with the state's Department of Community Affairs, added that the Giant Wheel, which was constructed in 1985, passed an inspection on March 17. The Giant Wheel is one of the tallest Ferris wheels on the East Coast, according to the news source.

The New Jersey accident occurred just days before the Orange County Register reported that there were 284 incidents that required medical attention at amusement parks in Orange County, California, over the past two years.

According to the news source, the theme parks included Disneyland and Knott's Berry Farm, but no deaths were found in the report.

If you or a loved one have suffered losses in this case, please click the link below and your complaint will be sent to an accidents lawyer who may evaluate your Amusement Park Accident claim at no cost or obligation.
Request Legal Help Now