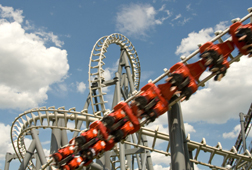 One such lawsuit was filed by the family of a man who fell approximately 30 feet from a roller coaster in March and died from his injuries. The victim, Brian Greenhouse, was reportedly in the first car of the Hi-Miler roller coaster ride when he fell, although so far there is no explanation as to how he fell from the car. According to an article in the Houston Chronicle, although ride operators are supposed to monitor the full ride while it is in operation, in this instance the operator took his eyes off the ride for a second, which is reportedly when Greenhouse's accident occurred.

Reports indicate that Greenhouse fell and hit a 44-year-old man who suffered a broken ankle. Greenhouse was pronounced dead at a local hospital later that day.

An investigation is being conducted in his death. A spokesman for the Houston Livestock Show and Rodeo, the event where the roller coaster was operated, said that the safety bar and lap strap were in place at the end of the ride. Furthermore, the spokesperson noted that safety consultants hired to inspect the ride found no mechanical problems.

This year has already seen amusement park tragedies. In April, a three-year-old died after he came out of a ride's safety restraint and fell to the ground. The Chicago Tribune (04/20/11) reports that the family of the young boy has filed a lawsuit against Go Bananas, the Chicago park where the accident occurred, alleging negligence caused the death. The victim, Jayson Dansby, was on the Python Pit roller coaster with his twin brother when he fell to the floor, suffering multiple injuries. According to a lawyer for the family, the ride operator attempted to stop the ride with the emergency brake, but the ride did not immediately stop.

Meanwhile, a woman who witnessed the accident has filed a lawsuit of her own, alleging emotional anxiety and distress.