An Amusement Park Accident is not confined to patrons. Often, those working at the amusement park have their fair share of close calls and accidents. To that end, there have been Amusement Park Deaths. 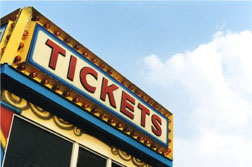 Luckily, an employee of Disneyland, located in California, survived an accident involving the detonation of a shell at close quarters inherent with a planned display of fireworks. The Anaheim Fire Department reported that the employee, who had been loading fireworks for that night's show, suffered what the employee described as a possible ear injury after a shell detonated in a tube the employee was loading at the time.

The employee was taken to the hospital, and Disneyland cancelled its "Believe in Holiday Magic" fireworks show for a total of seven nights.

The theme park accident occurred prior to last Christmas, when Disneyland was observing programming dedicated to the pending Yuletide.

Meanwhile, theme parks located in Orlando, Florida, reported 12 injuries related to Theme Park Accidents during the last quarter of 2011, according to the Orlando Sentinel (1/23/12). The state of Florida offers a slightly more relaxed regulatory environment for theme parks in exchange for diligent self-reporting of accident and injury, four times per year.

Some injuries were health-related, inherent with a prior condition, the Sentinel said. However, some injuries were directly related to the amusements themselves. A 48-year-old man was reported to have fractured an ankle at Walt Disney World's Typhoon Lagoon.

Legoland, a new theme park that opened late last year, submitted its first report to the Bureau of Fair Rides Inspection. Among the six amusement park accidents reported was that of a five-year-old boy whose foot became caught between the vehicle in which he was riding and the unloading platform as he exited too soon on the Lost Kingdom Adventure ride.

However, such injuries pale in comparison to the horrific theme park accident suffered by Kaitlyn Lasitter, who was 13 when a malfunction in the Superman Tower of Power ride at the Six Flags Kentucky Kingdom in Louisville, Kentucky, cost the teen her feet in 2007. A cable snapped, wrapped around the girl's legs and tightened as the amusement ride car plummeted to the earth at an estimated 54 miles per hour.

Both feet were sliced off above the ankle. One foot was successfully re-attached in hospital. The other foot, however, was too badly damaged to be saved, resulting in the need for a prosthetic device.

Kaitlyn's family responded with an Amusement Park lawsuit. Terms of the specific settlement were not disclosed.