Joy’s mother first had transvaginal mesh surgery using an American Medical Systems (AMS) device in 2001 to treat urinary incontinence. She believes that the TVM sling caused her mother’s health to deteriorate and ultimately led to her death. 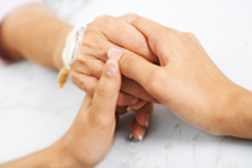 “My mother’s first surgery did absolutely no good,” says Joy. “She was still incontinent, and soon afterwards, she suffered urinary tract infections, one after the other. In 2005, she had a second mesh surgery where they also did a partial hysterectomy (I assume it was because the first surgery needed correcting). That time the TVM implant took about four hours with two surgeons. When my 74-year-old mother came out of the anesthesia, we knew right away that she should never have had another AMS transvaginal mesh.”

Joy says that not only did her mother suffer AMS side effects, namely a lot of pain and discomfort from the mesh, but she had an adverse reaction to the anesthesia and never recovered. And again, the procedure did nothing to help treat her incontinence. Joy also wonders why the surgery took so long. Did both surgeons try to remove mesh that may have eroded?

More AMS TRANSVAGINAL MESH News
“A good friend of the family, a registered nurse, told us that sometimes elderly people never recover from anesthesia and other times you just snap out of it,” Joy explains. “My mother really went downhill after that and she couldn’t control her bladder at all. Her potassium level bottomed out - they said it was from constant urination. And her magnesium level was dangerously low.

“Another thing: When mother came out of the second surgery, the two surgeons talked to me and my father. One of them told my mom and dad that they had to restructure her rear end; they did some kind of tacking. ‘I can tell you one thing, you are just like a 16-year-old down there now,’ one of the surgeons said to her. Later my mum said to me, ‘I could have killed him for saying that in front of your daddy.’ It was in poor taste, to say the least. I am still mad at those surgeons but I am furious with the AMS manufacturer. My mother passed away last year and I blame her death on AMS.

“I am pursuing an AMS lawsuit and I’ve been in contact with AMS lawyers, but no amount of money will change my mind.”