Encouraging women with AMS transvaginal mesh complications to have the device removed in order to ensure a bigger cash payout is unethical, to say the least. This scenario sounds as horrific as stealing kidneys from someone in a third world country. Actually, it’s worse, because the scene is Florida and it’s happening now. 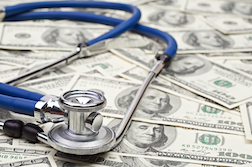 Back in the late 1990s headlines such as “Travelers Beware” were rampant over the Internet--outrageous stories about organ selling, such as drugged travelers waking up in ice-cold baths after the kidney thief left the hotel, cooler in hand. Of course there is nothing associated with having a kidney removed and having transvaginal mesh removed. Or is there?

Both surgical procedures are “illicit enterprises” that benefit a third party financially. These third parties are the kidney thieves paid on the black market. They are law firms that allegedly and highly improperly solicited AMS plaintiffs, women suffering from mesh complications, in the 100,000-case mesh litigation. The women who were (allegedly) approached did not have the mesh removed, for one reason or another. But these law firms know that a plaintiff’s case is worth more money if she has undergone mesh removal.

There is a lot of money to be made from women injured by transvaginal mesh. And a lot of people benefit. For instance (and this is rather convoluted, but please bear with us),

So American Medical Systems (AMS) subpoenaed Law Firm HQ, AkinMears and a few other law firms. AMS claims that Law Firm HQ was at the heart of an “illicit enterprise” that steered mesh plaintiffs into unnecessary surgery in order to inflate damages claims.

According to Reuters, Law Firm HQ and others are fighting the AMS subpoenas, arguing that the pelvic mesh maker is improperly attempting to invade attorney-client privilege and that the defendant’s demands for information are irrelevant to the real issue of AMS’ liability to women implanted with mesh.

As if these women haven’t gone through enough….

Posted by
Mesh Orphan
on January 4, 2018
I agree and sympathise with the story above, after my Boston Scientific Transobturator polypropylene mesh sling procedure ...
I returned relentlessly to the implanting OBGYN about the inability to urinate, chronic weakness, pain... Dr. would examine me and say nothing is wrong, your bladder and sling look great. "Let me give you some valium, you are just to uptight...this is in your head and you need to lighten up".
A few years post-op my daughter called from Houston- "Mom, when I took you to the Hospital for a bladder procedure; did they use something called MESH?". I said yes, (by this time I was on disability, couldn't sit for more than an hour, had been seen a couple of pain management doctor (who required a urine specimen, but would not catheterize me for it) ...even though I was not on prescription meds yet (my stubbornness).
However, I had been in Physical Therapy, Psychological Counseling for Pain and Loss, Steroid injections, Lydoderm Patches, ICE! ICE! and more ICE! Chiropractic care, Massage, Acupuncture and PRAYER! Prayer! Prayer! I developed a 20cm FLUID CYST with DEBRIS covering the whole top R side of my liver and some other smaller ones. The surgeon who removed the largest one said it had 1150 of fluid- largest he had ever seen. The surgical team in theatre were having a field day with that one! There was diverticulitis, Urinary Tract Infections, unexpected falls when my knees buckled with no warning, and once I was down on the floor it was like there was no connection between my brain and legs...I would have to wait until I could feel them and find something or someone to help me up. It happened in stores, parking lots, nursing homes, home, inside, outside...once IN THE BATH FILLED w water...It was s frightening...I only take showers now. TaDa...I lived on adrenalin, chronic disbelief that no one could tell me what was going on. My daughter was under the impression it had been recalled and everything about me was the same as advertised on TV (I don't watch TV). It is a horrible injustice that is still happening...to men, as well. I do not understand the laws and believe the FDA should be sued or be the ones suing these companies for us. Federal oversight of Medications and Devices should be dissolved and MEDICINE needs to be Governed by each State.

Posted by
Dorothy Griggs
on June 21, 2017
The theory that women have to have the Mesh removed in order for the Mesh Manufactures to offer a decent settlement is insane. I was implanted in 2002 at that time there was really no approved transvaginal mesh on the market no data approved by F.D.A. after the recall in 1999 none should have entered the market on 501K as the earlier product was recalled. Until Data is cleared it is experimental. Dr trusted medical device manufactures the same as patients trusted doctors . I have suffered pain for over 10 years.Doctors blamed my pain on everything except mesh,like they didn't know. I didn't know. I accepted what I was told and only put the pieces together in 2011 or 2012 through Tv ads about being injured by the mesh I could check off about every symptom listed. Even a doctor telling me I needed reconstructive surgery I did not know mesh has caused all these problems. with enough research I know now, I know none of the Mesh Manufactures through 2006 ever submitted data to F.D.A. at a one year period to have their product taken out of expiermental stages. That I never signed or knew I was receiving a medical device expiermental product or a mesh sling. Everything about mesh has been a high risk to women covered up through mesh manufactures doctors F.D.A. Ten years of going around feeling like you have knives sticking in your pelvic bones. Even billing submitted through the mail was a felony. Two felonies,years of my life lost to pain, I can't get back my years and the only way a woman is going to receive a decent settlement is undergoing multiple surgeries when the best years of our lives have passes us spent in pain because doctors refused to acknowledge what the problem was/Is. Only since lawsuits are being set up on tiers by # of surgeries and a few more doctors are learning to remove mesh is it recognized after 10 plus years of pain why would a woman have to go through all the surgeries,as the Mesh is wrapped up in tendons nerves muscle, tearing their bodies apart ,causing autoimmune disease and more , why is it tiers for payout. What an additional insult. Where is justice for the injured , now aging, why did doctors, F.D.A. cover this up so long, give me my life back, oh that is impossible, then pay for it.Provide for all that is stolen from me intimacy, swiming, biking golf, ability to even clean my house or stand very long in a shower. No shopping no social life , just a life destined to pain, and more surgeries would mean more scar tissue. How dare a company this corrupt to split up womens lives in tiers.No company should have this right