South Africa is the latest country to remove AMO MoisturePlus Multi-Purpose Lens Solution in the wake of concerns over the product's link with Acanthamoeba keratitis (AK), a rare but serious eye infection which could lead to blindness.

The sometimes-painful AK condition is associated with an amoeba commonly found in water, and while it is still unclear whether or not MoisturePlus carries any direct contamination, there's enough evidence to conclude that some degree of association, or link with the AK amoeba and AMO MoisturePlus exists. As a precaution the manufacturer, Advanced Medical Optics of Santa Ana California, initiated a worldwide recall in May of this year. 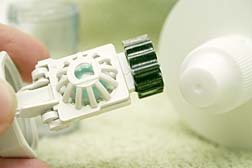 In South Africa, that country's Medicines Control Council (MCC) initiated a removal of all MoisturePlus product from store shelves on June 1st. However, there is a concern that consumers in South Africa may still be using MoisturePlus, according to a published statement by Mandisa Hela, who heads up the MCC. Hela notes that despite the international recall, South Africa received no official notification of the recall, and therein lies a concern that South Africans may still be using it, and putting their eyes at risk.

Genop Healthcare SA, the distributors of AMO MoisturePlus in South Africa, notes in a statement released July 6th that the product recall was voluntary.

And that's true. Following an investigation into 138 cases of AK in the United States over a three-year period by researchers at the University of Illinois at Chicago, the Centres for Disease Control and Prevention in Atlanta (CDCP) concluded that the markedly increased number of cases (normally 2, or 3 per year) represented a potential outbreak, and articulated its concerns to the manufacturer. Advanced Medical Optics immediately withdrew MoisturePlus by way of a product recall - but the recall was voluntary, and not mandated either by the CDCP or the U.S. Food and Drug Administration.

"Further investigation shows that the AMO Complete MoisturePlus was not intrinsically contaminated," Genop says, adding the caveat that it's use "increases the risk of AK."

In a statement which appeared in the July 7th edition of Saturday Star in South Africa, Genop Healthcare SA stresses that "as patient safety is paramount to AMO the company is taking decisive action to stop shipments, recall product from the marketplace and encourage consumers to discontinue use" of MoisturePlus Multi-Purpose lens solution.

Earlier this month the American Journal of Ophthalmology (AJO) reported that ongoing investigation suggested "a strong association" between AMO MoisturePlus Multi-Purpose Solution, and the painful AK infection. However, in its July issue the AJO goes on to say that 39 per cent of AK cases reported no use of AMO MoisturePlus, which includes use in combination with any other product. This suggests that while AMO MoisturePlus remains a definite factor, with a greater than 16-fold higher risk of developing AK - it isn't the only one out there.

More News
A spokesperson for the South African Optometric Association (SAOA) observes that other contact lens solution manufacturers and distributors had withdrawn similar products following the outbreak, as a precaution.

So far there are no reports of AK infection in South Africa.

Symptoms include blurred vision, sensitivity to light, redness, eye pain, and the sensation of something physically in the eye. Some patients have made the observation that it feels like a piece of glass. Symptoms can vary greatly, and any individual with one or more symptoms should seek a medical opinion right away. Early diagnosis could prevent painful corneal tears and scarring, which could lead to blindness.

AMO faces a number of product liability lawsuits. Investigation of the AK outbreak is ongoing.

If you or a loved one has developed an eye infection after using AMO Complete MoisturePlus Multi-Purpose lens solution, please contact a lawyer involved in a possible [AMO Lens Solution Lawsuit] who will review your case at no cost or obligation.
Request Legal Help Now