Kevin Carraway knew something was wrong when he began having severe eye pain. "I went for a pair of glasses last year, and the optician gave me a pair of contacts, along with a kit containing AMO MoisturePlus Multi-Purpose Solution. They wanted my eyes to get used to the new prescription, by wearing the contacts," says Carraway, 27.

"I've been wearing contacts for years, and that's why I didn't understand my complications." 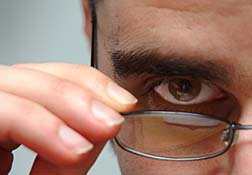 He didn't wear them for long, and was told to dispose of the contacts along with any unused solution after his glasses had arrived.

Still, he fancied the idea of having different eyewear options. "I tried some of those coloured contacts, and (the dispensing optician) gave me another kit - you know, with the AMO MoisturePlus solution, and the containers, and all of that.

"That's when the complications happened - and the third time I wore (the contact lenses) I got two sties - one on the lower lid and one on the upper. After that, it progressed to an ulcer on the cornea."

Carraway wound up with five prescriptions - three different antibiotics, pain medication and a steroid to help mitigate the formation of scar tissue.

'It felt like I had something in my eye, like a piece of glass," he says. "It felt terrible for the longest time, and they watered a lot. The specialist I went to told me to stop wearing the contacts, and I haven't since.

"I looked it up on the Internet and I saw what the symptoms were, from people using AMO MoisturePlus - and the symptoms they had, I also had. It leads me to believe that my troubles came from the AMO solution.

"It took my eye three months to heal. But I'm still having trouble with light sensitivity. I'm just thankful that the specialist told me to stop wearing the contacts when he did, because I've been afraid I might have lost my eyesight if I kept on using the solution."

More News
American Medical Optics (AMO) pulled their popular Complete MoisturePlus Multi-Purpose lens solution from the market in May, after the company was advised by the Centres for Disease Control and Prevention (CDCP) in Atlanta that an outbreak of Acanthamoeba keratitis (AK). was linked to AMO MoisturePlus.

This month (July), a report in the American Journal of Opthomology confirmed a strong association between the use of AMO MoisturePlus and the rare, but serious AK eye infection.

While the amoeba found to be the cause for Acanthamoeba keratitis turns up elsewhere, including bodies of water, municipal water systems and tap water, the AMO product appears to serve as a conduit for infection.

Advanced Medical Optics of Santa, Ana California, was swift in its response to the CDCP concerns, announcing an immediate recall.

If you or a loved one has developed an eye infection after using AMO Complete MoisturePlus Multi-Purpose lens solution, please contact a lawyer involved in a possible [AMO Lens Solution Lawsuit] who will review your case at no cost or obligation.
Request Legal Help Now

Posted by
ketty
on August 4, 2012
I've also been using this solution for almost 2 months, and got redness and pain in my eyes and was told by doctor to stop using contact lenses for some days. When I searched over the internet I found that people using AMO solution experienced similar symptoms, now I've switched back to my old contact lens solution.