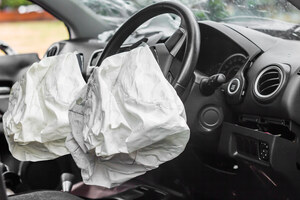 The latest recall order involves the 2007–2011 Ford Ranger, 2006–2011 Mercury Milan, 2006–2012 Ford Fusion and Lincoln MKZ/Zephyr, the 2007–2010 Ford Edge and Lincoln MKX, and the 2007–2009 Mazda B-series pickup. California drivers should log onto the NHTSA website to check for specific information. Some vehicles are too dangerous to be driven except to a dealership for immediate repair.

Avoiding harm is the first priority. But California drivers who have been injured by defective airbags also have recourse to legal remedies through personal injury lawsuits.


The years-long series of Takata airbag recalls is seen as “the largest and most complex safety recall in U.S. history.” The airbags were most frequently installed in cars from model years 2002 through 2015.

Drivers and passengers have been injured by metal shards that forcefully explode when defective Takata airbags deploy during an accident. The shrapnel may penetrate victims’ faces and necks, causing severe or fatal injuries.

Among Injuries attributed to Takata airbag explosions are: Those who survive may require emergency surgery, long-term medical care and reconstructive surgery to repair facial trauma.

The basic problem is the airbag’s inflator, a metal cartridge loaded with propellant wafers, which may ignite with explosive force. Airbags that use ammonium-nitrate-based propellant without a chemical drying agent appear to be the source of the problem, especially when the bags have been exposed to moisture, excessive heat, or simply as they age.As of 2018, at least 3 California fatalities and 20 injuries have been attributed to airbag explosions.


Cars manufactured in the years since the Takata recalls began are not subject to the same issues. The original owner of an older vehicle built during the affected years is also reasonably likely to have received the recall notice when it was issued. Used car buyers have no such protections, though. Neither do drivers whose original airbags have been replaced with salvaged or counterfeit parts.

California’s Vehicle Code prohibits dealers from selling automobiles with defective airbags. Compliance seems spotty, however.
In late 2019, the California Public Interest Research Group and Consumers for Automotive Reliability and Safety released the findings of a study on used car sales that targeted AutoNation, one of the largest automotive dealership groups in the U.S. Many of the vehicles at the dealerships surveyed had unrepaired safety recalls, including defective Takata airbags. A 2018 Bay area survey identified more than 100 unrepaired safety recalls out of 1,000 used cars for sale. Person-to-person sales, of course, are even less regulated.

In 2018, the LAPD’s anti-piracy unit investigated and ultimately arrested a seller of counterfeit airbags who was operating a makeshift body shop in his back yard. He was buying parts from China and assembling them himself. The telltale sign - he was selling them for roughly one tenth of the cost of a genuine part. According to the officer interviewed, “[m]ost of the counterfeit bags, if they deploy at all, could also fling emblems and sharp pieces of metal like a projectile directly into your face.


Defective airbags put drivers at a risk of debilitating injuries or death. In California, drivers who are injured by these airbags and who bring personal injury lawsuits may be entitled to either or both economic and non-economic damages. Damages are also available through wrongful death lawsuits to families who have lost a loved one because of airbag injuries.

More DEFECTIVE AIRBAG INJURY News
Economic damages may be awarded to compensate defective airbag injury victims for the verifiable financial costs they incur after an accident. These can include medical bills as well as lost wages. Economic damages can be awarded to make up for this loss of income.

But some harm is harder to quantify. Airbag injuries are also associated with injuries for which it is harder to assign a dollar value. Non-economic damages may compensate for disfigurement, embarrassment, mental anguish, loss of enjoyment of life, and pain and suffering.

Avoiding harm is, of course, the first, best choice. California motorists must rely on their own vigilance to keep themselves safe in many cases. But when vigilance fails, as it may especially with used car sales and replacement parts, a personal injury lawsuit may bring some relief.