Veteran attorney Rich Newsome has been around the block and back again representing clients in serious injury and wrongful death cases related to problems with airbags. He knows the situation so well that he does a kind of “Airbag Lawsuits 101” presentation that answers a lot of questions that people have about what’s going on with airbags and whether or not they have a litigation-worthy case. 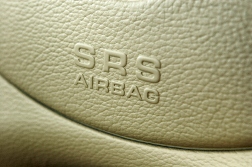 Newsome points out the three ways that airbags can go seriously wrong.

“The first way,” says Newsome “is where the airbag fires badly. One obvious way is the Takata defective airbags. This is where the airbag explodes and sends pieces of metal out and either cuts or kills one of the passengers or occupants. That’s one type of lawsuit.”

Sometimes the airbag sensor is interfered with in some way that the consumer is not aware of until it is too late. Perhaps the consumer is in a fender-bender and takes the car into the body shop to have the car repaired. Then, during the repair, the mechanic somehow “messes up” the sensor.

“That sometimes is an example of why an airbag doesn’t fire and doesn’t protect a consumer when they really need it,” says Newsome.

Then there is the third type of problem that can lead to a lawsuit, as Newsome points out. “That’s when the airbag fires when it is not supposed to fire. For example, someone is driving down the road and they hit a bump causing the airbag to go off and causing them to lose control of their vehicle,” says Newsome. “That shockingly happens a lot. More than people realize.”

One of the cases Newsome has taken to trial happened in Fort Lauderdale a few years ago. “A woman was going 8 to 10 miles an hour. She hit a slick road after work one day, she hit a barrier, and her airbag deployed and it killed her,” says Newsome.
“Again, airbags can be really dangerous. We took that case to trial and got a verdict for that family because of the defective airbag.”

The defective airbag recall of more than 24 million vehicles is the largest automotive recall in history. It potentially affects millions and millions of Americans and their vehicles. Unfortunately, consumers still can’t find out if their vehicle is affected. Newsome slams the NHTSA, Takata and the auto manufacturers for not making that information public - yet.

“Unfortunately, under the terms of the deal the government cut with Takata, they are not going tell everyone until at least the end of 2019 whether or not their vehicle is affected,” says Newsome.

The reason is that the government has relied on a report, paid for by the auto industry, that says the airbags are not “actually dangerous” for at least six years (after installation).

More AIRBAG INJURY News
“What does that mean for consumers?” says Newsome. “That means that one out of four of us may have a defective airbag sitting in the car in your driveway. It means you don’t have the chance to know about it because they are not going to send you a recall notice right away.”

The government has said it may release some of the information proactively (see Safecar.gov). In other words, if you ask, you may be able to find out. Newsome says if you have that opportunity, take it. “If you have one in your car, take it in and get it replaced. Don’t mess around. You can be seriously injured and/or killed.”

Newsome ought to know. He has had many, many clients that have suffered serious injuries - and like the woman in Fort Lauderdale, even killed.