One would assume that when one drives a Bentley, everything would work, and especially safety features such as airbags. But apparently not, according to the story of a Russian widow who is suing the luxury carmaker in an airbag lawsuit alleging the failure of side curtain airbags caused the death of her husband. 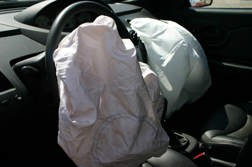 Bentley is owned by Volkswagen Group, but is a brand unto itself and enjoys a solid reputation amongst well-heeled patrons wanting to make a statement with the vehicle they drive.

According to a recent story in Australia's Centralian Advocate (1/8/13), Alexandre Anisonian was driving his Bentley Continental GT when he was killed February 8 of last year. His vehicle was broadsided by a truck that ran a red light and the curtain airbags failed to deploy.

The plaintiff lawyers, according to the report, have since run several tests and have concluded the side curtain airbags should have deployed in association with such an impact, but failed to do so. Anisonian's widow is suing Bentley for wrongful death and seeks the equivalent of US $1.9 million in damages and compensation in her airbag failure lawsuit.

In an unrelated story, Chrysler Group was recently struck with the opposite problem??"airbags that deployed, when they shouldn't have. The automaker triggered a recall late last year of nearly 920,000 vehicles under the Jeep brand to repair or replace defective airbags.

According to The Detroit News (11/10/12), Chrysler said it had received reports of no fewer than 215 inadvertent airbag deployments. Such occurrences could cause serious accidents and airbag injuries.

Other manufacturers have undertaken recalls due to airbag failure, and The Detroit News reports the National Highway Traffic Safety Administration (NHTSA) has made unintended airbag deployment a top concern.

More AIRBAG INJURIES News
In the midst of airbag failure, lawyers undertaking airbag lawsuits will want to know where those airbags were manufactured, given the continuing growth of outsourcing manufacturing to China.

MailOnline (The Daily Mail 10/23/12) reported that an auto mechanic and shop owner from North Carolina earned over $1 million in a single year through his purchase of what were described as fake airbags from China, then reselling them on eBay.

Igor Borodin flipped about 7,000 of the bogus bags to unwitting online buyers between February 2011 and May of last year, earning $1.4 million in profit. One of the cheap airbags purchased from Borodin on eBay was tested and found to not inflate properly.

The man pleaded guilty to trafficking counterfeit airbags. In a twist of irony, his guilty plea came two weeks after the NHTSA put out a warning about the availability of fake airbags that could cause inadvertent airbag injuries.

If you or a loved one have suffered losses in this case, please click the link below and your complaint will be sent to an accidents lawyer who may evaluate your Airbag Injuries claim at no cost or obligation.
Request Legal Help Now

Click to learn more about LawyersandSettlements.com
LawyersandSettlements.com - A trusted, independent legal news provider bringing quality news and information on all legal cases and lawsuits filed in United States of America to its readers since 2002. Over 250,000 legal help requests including Accidents, and Defective Product Cases have been forwarded to lawyers all across to the country.