An accident involving allegedly faulty airbags that caused serious injuries when a vehicle’s airbag deployed too forcefully has resulted in a settlement. The terms of the settlement, which resolves claims of negligence and gross negligence in the airbag injury lawsuit, have been kept confidential. 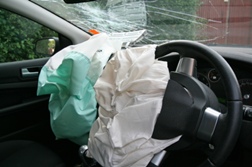 According to the Salt Lake Tribune (6/10/16), Randi Johnston was driving her 2003 Honda Civic to work in September 2015 when she was involved in a five-car accident. The airbag in her vehicle reportedly deployed with too much force, sending metal shrapnel into the car’s cabin. The shrapnel became embedded in Johnston’s neck, severing her trachea and causing permanent damage. Luckily for Johnston, an army medic was at the scene and provided care until emergency treatment arrived.

Although she survived, Johnston suffered permanent damage to her vocal cords and has had lasting difficulty speaking.

Johnston’s lawsuit was filed against Takata Corporation, Honda Motors and a local dealership. The lawsuit, which was filed in November 2015, was settled for an undisclosed amount.

Airbags made by Takata are still the subject of a massive recall due to problems with their deployment. Meanwhile, lawsuits are being filed against the companies responsible for putting the defective airbags in vehicles with plaintiffs alleging the companies did not move quickly enough to recall affected vehicles.

Even though airbags are designed to protect vehicle occupants in the case of an accident, when they fail to work properly airbags can cause serious injury. Airbags that deploy too violently, for example, can send sharp pieces of metal flying into the cabin, putting occupants at risk of serious injury.

More AIRBAG INJURY News
Airbags that deploy at the wrong time in an accident also put drivers and passengers at risk because their bodies could be out of position - such as too close to the airbag - when they come into contact with the airbag, causing injuries.

Worldwide, 14 deaths have been linked to the airbags involved in the Takata recall, which has so far affected more than 60 million vehicles. More than 100 injuries have also been linked to the safety devices. According to the New York Times (6/27/16), the most recent occurred in June 2016, when a 44-year-old Malaysian woman died in a car accident. Officials are still investigating the death and have not formally given a cause of death, but the woman’s car was one of the vehicles included in the recall. It had not yet been repaired.