The venerable airbag has now escalated beyond a valued safety feature to become a source for injury itself, either through inadvertent deployment when a sensor goes wonky or a failed deployment that results in airbag injuries. And now the airbag has become the focus of a juicy “whodunit” in Ireland after a former airline pilot was accused of killing his wife after disengaging the passenger side airbag. After ensuring she was not wearing a seatbelt, the accused is alleged to have driven their car into a tree. He survived, his wife was killed. Murder by airbag… 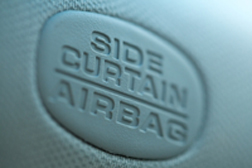 However, for most Americans, the airbag is viewed as the singular safety feature, next to a lap belt and shoulder harness, that will protect them in a collision. What’s more, side airbags and curtain airbags are more commonplace in even smaller cars.

But sometimes they don’t work properly, and the results can be devastating - often resulting in airbag lawsuits.

One of the latest cases involving alleged airbag failure that previously resulted in a hung jury has been resolved in favor of the plaintiff. Zachary Duncan was awarded $14 million in late June for injuries sustained after the side airbags in the 2008 Hyundai Tiburon he had been driving failed to deploy in an accident.

According to the Birmingham News (7/3/13), Duncan’s legal team claimed that incorrect sensor placement caused the side airbags to remain static, rather than deploy, in the 2010 collision. The plaintiff suffered traumatic brain damage in the collision. It is not known if Hyundai Motor Co. plans to appeal the award, which was announced in Virginia on June 28, 2013.

When airbag failure first made headlines, it was back when airbags were still relatively new, and primarily located exclusively at the front to protect the driver and front passenger from frontal impacts. They were also deemed too powerful - in some cases causing injury to small adults and even killing small children placed in the front seat.

Manufacturers responded with decelerated airbags, and high-end vehicles began appearing with curtain airbags and side airbags, in order to offer additional protection to all occupants of a vehicle.

Cars with side airbags are now commonplace as manufacturers compete with one another for the mantle of having the safest car on the road.

But has complacency translated to airbag failure?

Witness the most recent airbag recall, undertaken by Chrysler. According to Postmedia (7/4/13), Chrysler Group will recall 282,000 minivans worldwide due to defective airbags. The problem, according to the report, is the potential for the affected minivan to contain a control system inadvertently programmed to deploy side curtain airbags on the opposing side of the vehicle.

More AIRBAG INJURIES News
In other words, if there is an impact to one side of the minivan, the side curtain airbags would deploy on the other side of the vehicle. Thus, the passengers that would most benefit from protection with a side airbag would receive none at all.

Minivans are favored by busy families with small children. It’s the kids that ride in the back and would benefit most from side curtain airbags. In minivans, side airbags and children go hand in hand. In the case of airbag failure, the results can be catastrophic.

The airbag recall affects models of the Dodge Grand Caravan, and Chrysler Town and Country and Ram Cargo Van. Chrysler said in the report that the control just needs to be re-programmed. The affected vehicles were assembled in Windsor, Ontario.

Chrysler reported it was aware of three related accidents and one minor airbag injury.