Airbags are supposed to save lives, so when airbag injuries result in serious harm, or death, to vehicle occupants, people are naturally surprised. At least one airbag lawsuit recently resulted in a settlement for the family of a woman who died when her airbag exploded after a minor accident. 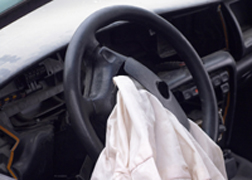 According to NBC 12 (2/25/13), Guddi Rathore bled to death when her airbag exploded after what was described as a minor fender bender. The explosion sent metal debris into the vehicle she was driving, cutting her neck and severing her arteries. Rathore’s family settled with Honda for $3 million, but also signed a confidentiality agreement.

Although the settlement is with Honda, a company called Takata - which supplies airbags and seatbelts - paid the settlement. Each of Rathore’s three children, who were in the car at the time of the accident, will receive $567,000 when they turn 18.

Meanwhile, airbag recalls continue to affect automobile makers. In January 2013, Toyota recalled more than 850,000 vehicles for airbag defects. Affected by the recall were 2003-2004 Pontiac Vibe models, and 2003-2004 Toyota Corolla and Toyota Matrix models. According to the company, there was a defect in some of the airbags that could cause the airbag to deploy without any impact, exposing vehicle occupants to a risk of injury.

More AIRBAG INJURIES News
In January, Honda recalled approximately 750,000 vehicles because the airbags were missing rivets, which could potentially cause injury to the driver. Luckily, there were no injuries reported related to the two recalls, but in some cases, recalls have been announced after injuries occurred.

USA Today (2/10/13) reports that already in 2013 more than 1.5 million Honda and Toyota vehicles have been recalled due to airbag-related problems. In 2012, there were 22 separate recalls announced. The increase in recalls has been blamed on more airbags being put into cars and more sophisticated systems being used to operate the airbags.

Among the problems with defective airbags are airbags that deploy unnecessarily, airbags that do not deploy when needed or airbags that send debris flying into the cabin of the vehicle. Any one of these situations exposes the driver and passengers in vehicles to additional risk of injury and possibly death.

Posted by
Jeannette rodriguez
on January 3, 2018
I received a post card to file for a law suit but missed placed card what can I do now
Posted by
David R. Herrera
on November 2, 2017
On approx. May 20,2014, air bag did not deploy when car backed into front fender.
Posted by
M.Casini
on February 22, 2017
I have a Honda CRV 2008
Recently had a front hit to driver side fender/number
Air bags did not deploy/ seat belts jammed the heck out of me. I did get the recall bags in but wondered why they didn't deploy?? The light for air bags showed it lite up???
I have terrible back injuriy. Is this a case on Honda?? Or her insurance?

Should not have deployed.

Posted by
Donna Adkins
on March 24, 2013
Which Honda vehicles, I have a 2006 Honda Ridgeline pickup truck, am I safe? Thank you, Donna Adkins