Just hours ago, what started as a routine flight from Victoria on Vancouver Island, to Toronto, Ontario turned into a nightmare for passengers and crew of Air Canada's flight AC190. No one dreamed, as they boarded the Airbus A319 jet, that many of the 83 passengers on board would be sent tumbling from their seats as the plane hit turbulence.

Ten people were hurt, some seriously it has been reported, when the plane dropped three separate times, according to passenger Andrew Evans, in news reports. He said after the third drop, the plane rolled a bit.

Dishes flied after a serving cart tipped over. One passenger reported that a friend on the flight flew up in the air; hit the ceiling and crashed back down.

The flight was diverted to Calgary International Airport just after 8 a.m. this morning, where it was met by 11 ambulances and other emergency personnel and vehicles. 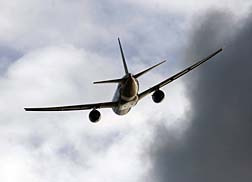 FlightAware, a US-based company that tracks commercial air traffic, reported the plane hit rough air at 7:50 a.m. CEO Daniel Baker said it attempted to cruise at a variety of altitudes, most likely to find smoother air.

It was reported that NavCanada declined to comment on weather conditions along the route, although the agency's website indicates there were no aviation weather bulletins in effect at the time.

The entire event lasted less than 15 seconds but is certain to forever affect the passengers aboard.

It is said that air travel is safer than car travel but the major difference for most of us is we have no control over what happens when we are inside a plane. We cannot rely on our quick reflexes or experience to avoid or overcome an emergency situation. We are at the mercy of the aircraft crew for our safety. When something goes wrong, first we need to be kept safe, and second we need to learn exactly what caused the problem and whether or not it could have been avoided or minimized. For the 83 people onboard flight AC190, answers must be forthcoming.

If you or a loved one were on flight AC190, please contact a lawyer involved in a possible [Air Canada Lawsuit] to review your case at no cost or obligation.
Request Legal Help Now