Charlene took ibuprofen for strep throat but just a few days later she developed a rash, which turned into blisters, on her feet. She didn't think too much of it until the rash moved up her legs. Being a woman, Charlene was worried that it was going to spread to her face so her doctor prescribed a steroid but it didn't help—he didn't recognize the early stages of SJS ibuprofen. In fact, he didn't even ask Charlene if she had taken any medications recently, which happens to be the major cause of Stevens-Johnson Syndrome (SJS). 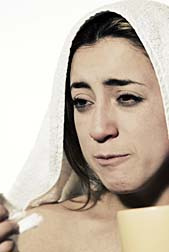 "After I saw this doctor, I visited my mum in the hospital (she had surgery) and I told her doctor about these blisters," says Charlene. "He took one look at me and gave me two shots of benedryl—he said I likely had an allergic reaction to the ibuprofen. By this time the blisters were opening and my skin was very painful--I was getting scared. About 2-3 days later I went back to the hospital, this time to ER in the middle of the night, because the blisters were all over my body.

When the doctor saw me she didn't like the way I looked and admitted me right away. I was on an IV drip; my potassium got low so they added that too. Everyone who came into my room wore scrubs and a mask; I couldn't have any visitors and I didn't get any meds. I was in a room by myself for about 4 days; then they sent me downstairs to see the dermatologist before I went home. He told me the scars would go away in a few months and he gave me a prescription for more steroids.

Not one person I saw told me that I had contracted SJS, but I am convinced that is what I had because when I got back to work, a nurse I tested for HIV (I am a certified HIV tester) took one look at my rash and said 'Stevens Johnson Syndrome'. I said, 'What?' She told me about SJS. That afternoon I came back to work and looked it up on the Internet—I couldn't believe it! The very same symptoms I had were listed.

More SJS IBUPROFEN News
By now the rash and blisters had stopped spreading and I was so relieved that I hadn't reached the point where others had suffered so much. I am so thankful that I am alive; that I have my vision and that my face isn't scarred. But if I had taken any more ibuprofen, I might not be so lucky. I have taken ibuprofen many times, mainly for cramps and headaches, but I never had a reaction until this one time. And I will never take this med again, nor will I take Advil or Motrin, both linked to SJS.

This incident happened four years ago and I put it out of my mind until now. The reason I recently filed a complaint with lawyersandsettlements was because I applied for life insurance and they turned me down because I was once in the Infectious Disease ward—that's where they put me for the 4 days when I had SJS. I never had a chance to tell the insurance company what happened; they wouldn't even return my calls—SJS is coming back to haunt me…"
READ ABOUT SJS IBUPROFEN LAWSUITS