The Main Concern with Stevens Johnson Syndrome Is Its Unpredictability

Though they are often prescribed for slight pain and inflammation, Ibuprofin and Advil are not without their risks. Many reports indicate that the medications can lead to serious conditions like Stevens Johnson Syndrome (SJS). 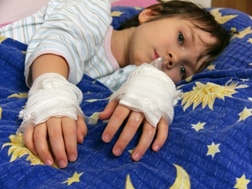 SJS and its more serious form, Toxic Epidermal Necrosis (TEN), are rare but life-threatening skin disorders that produce painful blistering of the skin and mucous membranes that can eventually lead to a loss of large sections of epidermal tissues.

The Centers for Disease Control and Prevention estimate that the disease only affects a few million people a year, but the SJS Foundation recently told the Dallas News that at least three new cases appear every month in the Lone Star State alone.

One of the largest concerns with the disease is its unpredictability. Severe allergic reactions to medications like Advil and Ibuprofin are often unforeseen.

"There's no way to avoid it. No way to know who can be at risk," Bernard Cohen, head of pediatric dermatology at John Hopkins Hospital in Maryland, told the Dallas News. "Someone could take Aleve for six years and the next time, for some reason, their body is sensitized."
READ ABOUT IBUPROFEN STEVENS JOHNSON SYNDROME LAWSUITS