Danny was young and healthy when he took Adderall last summer. He passed away four months later. “If I can just save one mother from the same experience, I would love the opportunity to tell you about my son, Daniel, and Adderall,” says Cheryl, crying. “I know about Adderall death so why can’t this drug be taken off the market?” 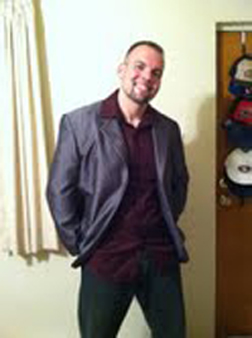 Cheryl believes that Danny would have been alive today if not for Adderall. “My son was only 31 years old and healthy, “says Cheryl, “but there is a history of heart disease in our family so why was he prescribed this drug, knowing that he could have an Adderall heart attack?”

Danny was a physical therapist, a body builder and a wrestler. But he went through a period of depression after a breakup with his girlfriend so a psychologist prescribed Adderall to help him concentrate. Cheryl says that the last time he phoned, Danny sounded “very tired.” She found out that he had complained to a friend about chest pains but attributed it to working out.

“My family has a lot of heart issues,” Cheryl explains. “I had double by-pass when I was 50. My mother and my grandmother both died of heart disease. So why was he given Adderall without any tests for heart issues? Danny’s death certificate says he died from coronary artery disease and a contributing factor was amphetamines: Adderall [which is an amphetamine] was the only drug he took.”

Cheryl says Danny wrestled part time in the San Antonio community and put on shows for kids. “During one wrestling match, I guess they were part way into it, Danny didn’t feel well and walked over to a chair,” Cheryl explains. “He sat down, apparently grabbed his chest, threw up, fell over and he was gone…”

Since Danny’s death, Cheryl has discovered a lot about Adderall. She found out that it was yanked from the shelves in Canada but only temporarily. “They talked about banning it here in the US and I know children have died from Adderall heart attack - I can’t imagine having a ten year old with ADHD passing away. You shouldn’t have to outlive your children.”

Cheryl says that Danny was tested when he was younger and he wasn’t diagnosed with ADHD. He had problems concentrating but she attributes that for simply not liking school. Danny eventually earned two degrees: a bachelors’ in marketing and an associates’ as a physical therapy assistant. He became a director in the physical training facility just before he passed - a wonderful life and career ahead of him.

“I have letters that say he was so good with patients,” says Cheryl. “I have a picture of him at a basketball game with elderly residents of the home so they could have an outing. And he often spent Saturdays, his day off, with kids in the community.”

Cheryl talked to her son’s psychologist but she couldn’t bring herself to talk about Adderall. Not yet, anyway. But she does want to know why he was prescribed it in the first place. “And maybe I will call the makers of Adderall,” she adds. “As far as I am concerned the drug makers took my son. Why don’t they have a warning to get your heart checked first? How can they sleep at night knowing this drug is causing deaths? If this is an acceptable loss for them, it isn’t acceptable for me.

(Back in 2006, one year after Adderall was pulled by Health Canada, the FDA said there was “a very small number of cases” (i.e., 20 sudden deaths and 12 strokes in adults and children using the drug) and that the agency “cannot conclude that recommended doses of Adderall can cause [sudden unexplained death].” The FDA did not pull Adderall XR from the market. Health Canada allowed Adderall XR to return to the market in August 2005, with a warning about misuse of the drug and the fact that it should not be used in patients with “structural cardiac abnormalities.” There was no such warning in the US.)

More ADDERALL News
Lately Cheryl has been online, looking at Adderall lawsuits. When she found out that her son passed away, Cheryl was hospitalized for three days. She was diagnosed with “heartbreak syndrome,” a condition that occurs when stress and a troubled mind affect the heart, causing symptoms that can mimic a heart attack. “My heart is broken,” she says.

“Danny always had a huge smile on his face. He was the sweetest man you would ever want to meet. He was a charmer - older women loved him. I have gotten so many accolades about how loving he was, how caring.” (At this point Cheryl breaks down.)…

“I want something to happen to make Danny’s death mean something and I hope to do that with an Adderall lawsuit. If there is anything we can do to prevent another mother from going through this...”

Posted by
Dustin
on February 18, 2013
Denise - with all due respect, you are addicted to an amphetamine. While legal, and possibly correctly prescribed based on current guidelines, the Adderall you take is an amphetamine. It is virtually indistinguishable from methamphetamine other than minor pharmacokinetic differences. Would it be appropriate for someone who admitted to having "abused [meth] in the past" to make a decision about appropriate use of it in the future for others?
Your opinion is valid only insofar as it describes just how addictive amphetamines are due to the fact that you direct a post to a grieving mother of a dead son defending the very substance that likely killed him. At the very least, your response is insensitive and misplaced. At worst, it's the desperate cry of an addict defending her drug of abuse bitterly against anyone who would dare oppose it. I hope one day soon you are able to get treatment for your addiction from a reputable physician and that you never suffer the many ill effects of stimulant use/abuse.
Posted by
sue
on February 18, 2013
I am so sorry for your loss. My son is epileptic and was prescribed this. he started having more seizures. we discontinued it.. evidently it can cause more seizures also.. He also has been checked for heart problems... the test came back fine... BUT..he has had episodes of a very slow heart beat . He was still prescribed this. Its really to bad we cant put our faith in the medical profession anymore. I can only thank you for sharing your information and informing others. I believe medication like this should come with a huge warning....If you want to risk it ok but for some of us....we shouldnt have to learn the hard way.WE also shouldnt have to spend hours researching medication. The pharmasuitable co. should be liable for not making the information readily available. Theres millions of meds out there and the doctors dont know the side effects of all. With BIG warnings on the stuff maybe some of these accidents may not happen. Again, thankyou for sharing your story...You are in my prayers
Posted by
Denise
on February 17, 2013
I will not pretend to feel your pain but the thought of loosing one of my children this way makes me sick. Having said this, I am a 42 yr. old mom, who has struggled with depression, dyslexia and anxiety. I would be an absolute mess without my Adderall/Ritalin that I take daily. I have been taking it for over 10 years. Can I or have I abused it in the past, yes. I realized this too and readjusted myself and intake. Can it be deadly, obviously. Is it the drug makers responsibility to know every person talking this drug? No! It is the prescribing doctor. If the person who prescribed it didn't do their homework or if your son didn't tell the person of the families history that is why this story ended this way. To take it off the market and make it unavailable to people who need it is not right and the fingers be pointed are in the wrong direction. Again, I'm sorry for your loss.