Although they are designed to treat Type 2 diabetes, some diabetes medications are involved in lawsuits working their way through the court system. Lawsuits alleging Actos side effects, Januvia side effects and Byetta side effects have been filed by plaintiffs who claim they were harmed by their use of the drugs. According to Ben Stewart, attorney at Stewart Law PLLC, each of the drugs is in a different stage of the litigation process. 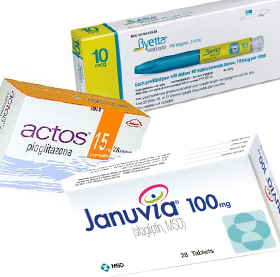 “Byetta lawsuits have been going on for several years in California state courts,” Stewart says. “They are currently trying Byetta cancer cases involving thyroid and pancreatic cancer, but there is no conclusion to those cases that I’m aware of. Lawsuits alleging pancreatitis linked to Byetta have been settled in California. Meanwhile, Januvia cases are currently just being filed. Januvia litigation has not moved very far through the court system yet, although we anticipate it will be assembled into a multidistrict litigation, which would consolidate discovery outside of California. That probably will not happen for 90 days, though.”

Actos lawsuits alleging bladder cancer are currently broken into two different actions, according to Stewart. The first is a multidistrict litigation in Louisiana, where discovery is ongoing. The second action is in California and was originally filed in state court for California residents. After litigation started, however, non-domestic cases (meaning those in which plaintiffs lived in other states) were allowed to be included in the action.

“The first Actos cases are on the verge of being tried in Chicago as bellwether cases, which show the defendants a determination of the value of the case and also show both sides the strengths and weaknesses of the arguments,” Stewart says. “Shortly thereafter, we expect cases to be tried in California state courts.”

More ACTOS SIDE EFFECTS News
Although plaintiffs can still join any of the lawsuits alleging various types of cancer associated with the diabetes drugs, in the case of Actos, the statute of limitations could be rapidly closing.

“Those patients should be continually monitored to ensure the hyperthyroidism doesn’t develop into cancer,” Stewart says. “The longer patients wait for intervention once it becomes cancer, the more difficult recovery is.”

Posted by
Rosie Wilson
on July 7, 2014
My husband was prescribed both Actos and Vanuvia, 4 years and 2 years, respectively. I received a phone call concerning the the ongoing lawsuit; was asked a number of questions, but left hanging. I am just following through on these cases to see if my husband may qualify for this class action. He was diagnosed with Thyroid Cancer in 2012 and, subsequent, had his thyroid removed. Please advise.