Luke is one of the lucky Accutane drug consumers: he didn’t develop Accutane inflammatory bowel disease or Accutane Crohns Disease like many people who were prescribed Accutane acne medication. But he did wind up in the hospital with severe stomach pains. 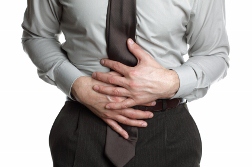 “When I was 16, a dermatologist prescribed Accutane as an acne treatment,” says Luke, now 26 years old. “He warned me about the possible side effects, but only to do with my skin. I remember that my skin peeled off and my lips in particular were very painful. That happens in the first phase and your acne gets worse in the beginning. Then there are lesser degrees of pain and suffering and eventually my skin cleared up. Many other kids in high school had the same reactions—even my brother was taking Accutane.”

With so many teenagers prescribed Accutane medication, it’s no surprise that many of those people now in their 20s are suffering from Accutane side effects. Luke stopped taking Accutane after about one year, which might have saved him from developing more severe bowel problems.

“I remember the dermatologist testing my liver enzymes,” says Luke. “He told me this test has to be done before prescribing Accutane, and again after you stop taking it. He monitored my liver enzyme levels about every six months, but the second time I was tested he asked me if I was heavily drinking the night before. That was a negative. Apparently Accutane had pushed me outside the safety level and indicated something was going wrong.

“Two years on, I started getting really bad stomach pain and I thought it was due to stress, that maybe I had an ulcer. I started drinking high-strength antacids but that didn’t help. I was even prescribed an antacid. Everything was indicating an ulcer but upper and lower GI tests found nothing. I even went to ER once because the pain was so bad—and I still have outstanding debts from the hospital! I got the impression that the ER doctor thought I was making it up; I had to basically suck it up. He couldn’t find anything wrong with me and just seemed irritated.

"But I’m frustrated. I had no idea that my stomach problems could have been related to Accutane and I kept trying to figure out why I had such bad pains that went on for so long--it was always on my mind. It wasn’t until my dad told me that he was suspicious of Accutane; he saw an ad somewhere, maybe on TV, linking the Accutane to IBD and more. There is nothing else that could explain it and why so many people have the same problems.

More ACCUTANE IBD News
"Eventually the pain went away, and I sure hope it doesn’t come back. I was stressed out before taking Accutane so I can’t really chalk it up to stress. And I have a lot of stress in my life now, seems like everyone I know does, but my digestive system is OK, for now at least.

"My biggest issue is that I am sure the drug makers know what is going on and they should be responsible. I went through a lot of suffering and going to ER cost my dad hundreds of dollars. And I am in debt at the hospital too, which has given me a bad credit rating. I am pretty sure that Accutane lawyers are only able to help people that have been diagnosed with IBS or Crohns disease, so I don’t anticipate getting involved in an Accutane lawsuit. But I do want to warn people who took Accutane and have symptoms similar to what I had that they should get checked out—don’t just chalk up stomach problems to stress like I did.”