Colin recently discovered that one of many Accutane side effects is ulcerative colitis. Now Colin’s Accutane attorney needs proof that he took the acne drug - and Colin has become “Amateur Accutane Investigator.” 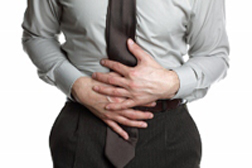 “I can’t find anything to prove that I took Accutane,” says Colin. “I wrote letters to Medicaid, I went to every pharmacy my parents might have used and I phoned a number of dermatologist offices. Unfortunately, my parents don’t remember and I was a teenager when I was prescribed Accutane. So I am at a dead-end right now. But after reading some medical journals proving that there is a definite link to Accutane and colitis, I am determined to find some kind of record.”

Colin, age 35, does remember taking three cycles of Accutane for six months at a time. He also remembers having lower back pains 18 years ago that he thinks were due to the drug. “I was young and didn’t think too much about it - and my goal in life was to get rid of acne: girls were foremost in my mind,” Colin says, laughing. “But I remember the dermatologist telling me it was a strong medication and that I took a very strong dose…

“I had pretty much forgotten about Accutane until a few years ago, when my wife connected the dots for me. And now looking back I realize that I had digestive problems starting in the mid-1990s. I never changed my diet but some foods were wreaking havoc and I was constantly suffering with diarrhea. Again, I didn’t think much of it and just stayed away from dairy and deep-fried foods.”

Colin’s digestive problems escalated. Around 2004, he had severe abdominal pains and found blood in his stool. His doctor chalked it up to stomach flu and prescribed antibiotics, but two weeks later, he was completely dehydrated. “I couldn’t keep down any food; anything I ate went right through me,” Colin says. “I lost about 30 lbs and I’m not a big guy; I am 5' 8" and 155 lbs. I was like a walking skeleton.”

Fortunately Colin had the wherewithal to get a second opinion. He went to the ER, had a CT Scan and was admitted to the hospital. Next morning they took out his appendix but he wasn’t getting any better. After four days in the hospital, he finally saw a gastroenterologist who ordered a colonoscopy and was diagnosed with colitis. And he could have kept his appendix.

Colin asked the gastroenterologist what could have caused this; was it due to his diet? Did certain foods trigger it? “He said they don’t have a handle on what causes colitis or Crohns Disease,” says Colin. “He asked if I was stressed out but that wasn’t the reason. He asked what meds I took but I didn’t think about Accutane.

More ACCUTANE IBD News
“After I had another colitis flare-up a few years ago, my wife mentioned it to the doctor she works with (my wife is a vascular technician). He told her about studies that show Accutane is associated with ulcerative colitis.

“No side effects were ever told to me and there is no way my parents were told. They would never have let me take this drug if they knew there were any side effects,” says Colin. “Now I see my gastroenterologist every few months. He told me that I will be on a number of drugs for the rest of my life; drugs that cost several hundred dollars per month in co-pay. The drugmaker should at least cover my medical bills.”

In 2012, Roche, the maker of Accutane, was ordered to pay $18 million in compensatory damages to two Accutane patients who had developed ulcerative colitis. Accutane settlements have cost Roche millions of dollars and Accutane lawsuits are still being filed.

Posted by
Michelle
on April 20, 2014
May someone speak to me about accutane. I had my large intestine and appendix removed due to mega colon which comes from a severe side effect when ulcerative colitis isn't treated. My problem is Florida judge dismissed my case I really needa llawyer to hear me our. I know I have a strong case I took I took accutane for a year and a half does anyone know anyone
Posted by
KIM MOWERY
on February 23, 2014
I know how you feel (Colin). I took Accutane when I was a teenager (82 & 83 when I was 12 and 13 years old) along with Tetracycline for Cystic Acne. My parent were trying to help me because I would come home crying because other kids were making fun of me and calling me names. They didn't know what it would do to me in the future and I don't blame them...I blame the pharm. companies that made it and knew.

The dermatologist I went to was in his late 60's when I was 12 years old, so by the time I was 40 years old and finding out about the lawsuit....he was long dead and my records long forgotten. The pharmacy "Big B" is no longer in existence either, so like you...there is no evidence other than all the colon problems.

In 1997, when I was only 27 years old, I had to have 2/3 of my colon taken out due to Diverticulitous. Doctors couldn't tell me why my colon looked like a 90 year old woman's. They didn't ask me if I had been on any kind of medications earlier in life.

I believe I should be able to receive something for all the pain and suffering I have gone through and am still going through.....because of that 1 surgery I had due to taking Accutane, it has led to 7 other abdominal surgeries and now I'm disabled with Chronic Pain for the rest of my life.

If you find out something that helps you get compensation could you please let me know too. I would greatly appreciate it. My email is kmowery@outlook.com

GOD bless you and yours.

Posted by
Buzz
on February 17, 2014
Sadly, LaRoche didn't properly warn patients back then even though they had internal studies from the 1970's that demonstrated a link between Acctutane and Inflammatory Bowel Diseases. Unfortunately, if you do not locate any records, you'll have no case in the legal system.