When Chris started taking Accutane, his acne was so bad to the point where he couldn’t wear his military uniform because the seams would rub on his back. The naval hospital prescribed Accutane medication and he took it for seven months. He was only 19 but remembers signing a waiver saying he understood that Accutane side effects can make people suicidal, but there was no mention of Accutane Crohns Disease or Accutane inflammatory bowel disease. 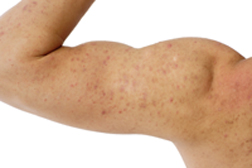 “I wasn’t too worried about Accutane acne medicine being linked to depression and suicidal thoughts because I am a pretty stable guy,” says Chris. “In 2009, I transferred from the Navy Reserves to the Marine Corps: I had aspirations to become a Navy Seal and I trained on my own time to prepare for underwater demolition school. I was in good shape. But by the time I had all the transfer paperwork completed, I began having strange bowel movements - I started bleeding.

On a family vacation to Hawaii, I was bleeding the entire time. I wasn’t too concerned at first but my mum convinced me to see a doctor. He wasn’t sure what it was but maybe a bug of some kind so he took stool samples; I never did get the results so it was likely nothing to worry about.”

But there was plenty to worry about. Chris went to California for Marine Corps boot camp. One day on a run of just 1.5 miles he passed out before the half-mile mark. Chris was first sent to a clinic where he had a blood test and was then sent directly to the hospital. His H & H count (meaning hematocrit and hemoglobin) was abnormally low. The normal range of hemoglobin for adult males is 14-18 gm/dl; Chris was 6-18. He almost had a blood transfusion; instead he spent three days in the hospital with a tube from his nose into his stomach.

“I was finally diagnosed with ulcerative colitis,” Chris says, “but nobody could tell me why or how I got it. That was a very miserable time. I was no longer fit for military service and two months later I was on a plane home with my discharge papers.

“I went to a couple of different doctors, looking for an answer and possibly second opinions. The first naturopathic doctor I saw gave me a blood test and confirmed that indeed I have ulcerative colitis. I couldn’t understand where this had come from because I had been healthy my whole life.

More ACCUTANE IBD News
“Now my lifestyle has drastically changed. It is like I have so many food allergies, but the naturopath has identified all the foods that can trigger an attack, and that list is extensive. I’m getting on with my life as best I can: I’m back in school and this time planning on a teaching career.

“Recently, my cousins had taken Accutane and they complained to my family of joint issues and told me not to take this drug. That triggered me to research Accutane IBD online and that’s when I found Accutane IBD. I mainly felt sad - the powerlessness of retrospect.

“I had so many aspirations and Accutane shattered my dreams. I didn’t feel that there was much I could do at the time and then I saw an ad on TV about an Accutane class-action lawsuit, specifically Accutane ulcerative colitis lawsuits, and that set the seed in my mind. Then a friend convinced me to contact Accutane attorneys.”