The tendency of some patients to become depressed and to exhibit suicidal behavior while taking Accutane (isotretinoin), is once again in the limelight.

Friday, former Chicago Bull's cheerleader Kim Smith filed a lawsuit against Hoffmann-La Roche, the manufacturer of Accutane, in which she claims Accutane left her in a dark depression that persisted for years. Roche maintains numerous studies show no cause-and-effect relationship between Accutane and depression. Mike Baird, Smith's attorney, acknowledged the uphill battle faced by plaintiffs, when he told NBC5 (Chicago, IL) reporter Rob Stafford, that no one has been able to prove in court a direct link between Accutane and depression. He hopes to be the first.

Whether or not this case goes to trial, it reminds us that the safety profile of Accutane is not fully understood. The product label approved for Accutane by the Food and Drug Administration (FDA) clearly states that its exact mechanism of action is unknown. (NDA 018662 approved on 10/02/2007). 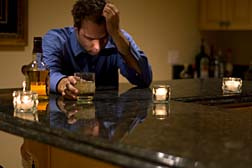 Accutane was approved by the U.S. Food and Drug Administration (FDA) in 1982, to treat severe recalcitrant nodular acne (the most severe type of acne) not responsive to other treatments. Accutane is chemically related to vitamin A and is on of the most potent teratogens (any agent that causes a structural abnormality following fetal exposure during pregnancy). Birth defects associated with Accutane include mental retardation, brain and heart defects. Birth defects or miscarriages can occur soon after conception, often before a woman realizes she is pregnant.

In early 2006, the FDA began a national registry, called the iPLEDGE program, to track and reduce the risk of fetal exposure to Accutane. The registry replaced the SMART program (System to Manage Accutane Related Teretogenicity), started by Roche in 2002, which was found to be ineffective. This past October, the national registry released figures for its first year of operation. More than 305,000 patients registered to use the drug, including 137,415 women of childbearing age.

Unfortunately, the data revealed that 122 women became pregnant matching the number reported in the previous year, under the SMART program. Of the 122 pregnancies, 78 were taking the drug when they became pregnant. Another 10 were already pregnant when they started Accutane, including two who had a doctor falsify pregnancy test results. This past October, the FDA announced some changes to the program, with the intention of improving its success rate. Perhaps next year statistics will show the desired reduction in pregnancies by women taking Accutane.

In August 2006, the results of a study published in the American Journal of Gastroenterology confirmed that Accutane causes an increased risk to its users of developing a serious intestinal condition called inflammatory bowel disease (IBD). Accutane users who experience abdominal pain, rectal bleeding or severe diarrhea are directed to stop using Accutane immediately. Accutane's medication guide says "certain symptoms may mean that your internal organs are being damaged. These organs include the liver, pancreas, intestines, and esophagus. If your organs are damaged, they may not get better even after you stop taking Accutane."

Not much argument can be made against that warning!

In a labeling revision (August 2005), the FDA alerted the public that it was continuing to asses reports of suicide or suicide attempts associated with the use of Accutane. The FDA also gave guidance that all patients treated with Accutane should be observed closely for symptoms of depression or suicidal thoughts.
Some of these symptoms are sad mood, irritability, acting on dangerous impulses, anger, loss of pleasure or interest in social or sports activities, sleeping too much or too little, changes in weight or appetite, school or work performance going down, or trouble concentrating, or for mood disturbance, psychosis, or aggression.

In the February 15th issue of Prog Neuropsychopharmacol Biol Psychiatry, (The neurobiology of retinoic acid in affective disorders. Bremner JD, McCaffery P. 2008 Feb 15;32(2):315-31), the role of retinoids as possible contributors to affective disorders are discussed. According to the report, retinoids represent a family of compounds derived from vitamin A that perform a large number of functions, many via the vitamin A product, retinoic acid.

According to the report, recent work has suggested that retinoic acid may influence the adult brain. Animal studies have indicated that the administration of Accutane is associated with alterations in behavior as well as inhibition of neurogenesis in the hippocampus. Additionally, a preliminary Positrone Emission Tomography (PET) study (a functional, nuclear medical imaging technology that displays different metabolic states of the human body) in human subjects showed that Accutane was associated with a decrease in orbitofrontal metabolism (brain activity).

The report also states "the overlap of brain areas implicated in retinoic acid function and stress and depression suggest that retinoids could play a role in affective disorders". Additionally, the report reviews the evidence in this area and describes several systems that may be targets of retinoic acid and which contribute to the pathophysiology of depression. Thus, a link between Accutane and depression is more than likely.

More News
In the study, twenty young and 20 elderly (age mean, 26.1 and 65.4 years, respectively) healthy male volunteers were only supplemented with 0.5 mg/kg/day of 13-CRA for 28 days. The Accutane product label (NDA 18-662 S-058, Approved October 3, 2007) states that the recommended dosage range for Accutane is 0.5 to 1.0 mg/kg/day. Adult patients whose disease is very severe with scarring or is primarily manifested on the trunk may require dose adjustments up to 2.0 mg/kg/day. These dose amounts are much larger than the 0.5mg/kg/day used in the study, and administered for a much longer period of time. Thus, Accutane could potentially result in diseases not being discovered until many years after patients stop taking it.

To summarize, the latest study data, although not definitive, suggests possible links to mood behavioral changes and degenerative diseases. Additional studies need to be done in order to establish definitively what are all risks and/or thresholds of Accutane. To date many questions remain unanswered and patients could be in serious jeopardy.

If you believe that your treatment with Accutane has resulted in medical complications, you should contact an attorney to discuss potential legal claims you might have. Only an attorney will know what you can recover for the harm Accutane has caused you.

Posted by
AR
on February 22, 2019
My mother took Accutane to get rid of her acne in her early 30s.
She passed away from ALS in her early 50's.
Connection between this degenerative disease and Accutane?

Posted by
R T
on November 9, 2018
I was diagnosed with early onset Parkinson's disease in 2012 at the age of 42. I took accutane for several years, from approximately 1982-1984. Are there any links between this medication and the disease?
Posted by
Mirta Huerta
on July 7, 2013
Dera Sir/madam:
My name is Mirta Huerta. I am from Venezuela, and came to this country USA 10 years ago. I am American Citizen from November 2011. I am 58 years old and was diagnosed with Parkinson's Disease in 2007 in Miami, Fl (Jackson Memorial Hospital) and Parkinson Foundation in Miami. However, the symptom started around 5 years before. The Parkinson's disease was ratified in the Parkinson Foundation Mohamed Ali in 2008.
Now, reading your article I want leave you know that I\during my 30-35 years old, that mean around 1980-1984 I suffer a very strong acne that was treated in Venezuela with Accutane (around 1 month -the same Doctor gave me the tablets because that medicine was too expensive and i was unable to pay). After that the Doctor prescribe me Retinol jalea .5 mgrs and I use that medicine for long time, around 1 year and it cured the strong acne. The Dr at that time told me that the side effects of the medicine wasn't know. The Doctor name was Obadia Serfaty, he pas away already and his patient continue with Dr. Murguey (I do not remembre her name (Cristina/Gisela I am not sure). I have not the proof , this was many years ago, but know I suffer a Parkinson's Disease in state III. Write to me in you considered that I can make a claim. Thanks.