Adam Mason of Pensacola was a very young man in 1991 when his doctor prescribed Roche Pharmaceuticals' Accutane to treat his acne. Soon afterward, Mason developed symptoms of Crohn's disease, a form of inflammatory bowel disease (IBD) and one of many potential side effects of Accutane that Roche has never fully acknowledged and only briefly mentions in their product safety warnings. 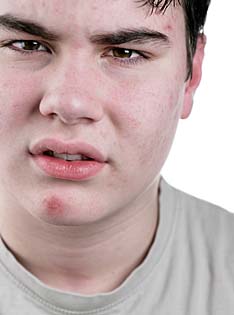 Since its introduction in 1982, Accutane has come under increasing scrutiny and legal attack for its many side effects. The better known of these include severe birth defects in babies born to mothers using Accutane; probable links to severe, often suicidal depression; and, as in Mason's case, various forms of IBD, including ulcerative colitis, Crohn's disease, and ileitis.

IBD can be treated with medications, but it can also become so severe that the only option is surgery to remove part or all of the colon. Mason fell into the second category; after being diagnosed with Crohn's in 2000, he required two surgeries, first to remove three-quarters of his colon, and later, to remove the remainder of the organ in 2007.

Suffering from diarrhea, fatigue, and depression and unable to continue his work as a welder, Mason filed suit against Roche in 2001, charging that the company failed to adequately warn him about the risk of IBD associated with Accutane. His lawyer says, "I knew it would be a David and Goliath battle."

More News
It was also a long battle, but finally culminated in October 2007, when a state court jury deliberated for two days and awarded Mason $7 million in damages. Announcing the company's intention to appeal the verdict, Roche spokeswoman Shelley Rosenstock said, "Roche is disappointed in the jury's decision in the matter of Adam Mason's allegation that Accutane was responsible for his inflammatory bowel disease. The Accutane labelling has contained a warning about IBD for more than 20 years. Nevertheless, there is no reliable scientific evidence that Accutane actually causes IBD." She apparently forgot to mention that Roche has never done any clinical tests to confirm or deny that connection.

Roche did indeed appeal... and on Tuesday, February 19, they lost. The appeal was denied and Mason's $7 million award was upheld. It was Roche's largest legal defeat over Accutane yet, and came on the heels of a $2.6 million judgement awarded in New Jersey in May 2007. It was also just one of hundreds of Accutane-related lawsuits now moving through the courts.

A victory for Mason? Perhaps, but he has spent his entire adult life in physical and psychological pain from Accutane, and faces more of the same for years to come; in fact, $5 million of the award was for future pain and suffering. Mason, now 31 years old, says simply, "It'll help me with medical expenses and everything. I'm glad it's all over with. It's been a long ride. Seven years."