Accutane: "It was the darkest place I've ever been."

In 1998, thirty-three year old Kim S. of Chicago was enjoying a life of vitality and success. As a youth, she had loved dancing and had gone on to become a cheerleader with the Chicago Bulls in 1987. "It was total pure energy and adrenaline," she told NCB affiliate station WMAQ. "There were times when Michael Jordan fell on my sneakers and landed on my pompom!" After earning a graduate degree from Northwestern University, she went to work as marketing director for a Chicago law firm; life looked good, with much to look forward to. But in 1998, Accutane changed all of that.

Accutane is Roche Pharmaceuticals' "last resort" medication for severe acne. In 1998, many of its frightening side effects were still only poorly understood, and the precautions listed for the drug did not, for example, include a warning about reports of depression and suicide among users.

Kim's dermatologist prescribed Accutane for a bout of acne. Within six months of starting daily doses of Accutane, she says, her life took a terrible turn for the worse: "It cleared up my acne, but the price that I paid for clear skin just wasn't worth it." 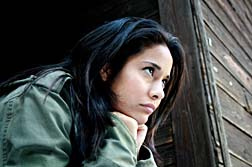 The price she paid was a severe, long-lasting depression. "It was the darkest place I've ever been—a place of complete despair and hopelessness. It got to a point where I just really prayed to die," she says years later. Trying to cope with that persistent depression over years destroyed her career and her relationships.

More News
And things could have been worse for Kim S. She might have been driven so far into that dark place that she took her own life, as more than 200 victims of Accutane's side effects have done. She could have been pregnant while taking Accutane and run a hideously high risk of bearing a child with crippling birth defects.

Kim S. is now suing Roche Pharmaceuticals for all that she has suffered. For its part, Roche insists that its product warnings for Accutane were "adequate as a matter of law" (whatever that means) as of 1998. Smith says, though, that she never was warned about depression as a possible side effect. She also doubts that her depression could have stemmed from other causes. "The only thing that changed in my life was taking Accutane."

For all that she has gone through as a result of taking Accutane, Kim S. says, "I do thank God every day that I am alive. At least I have a chance to rebuild my life when others don't."