While almost all Abilify lawsuits involve gambling addiction, Nancy’s teenage son became addicted to video games and it caused irreparable damage. If Nancy had known about Abilify side effects, she would have discussed with her son’s psychiatrist whether the risks outweighed the benefits. And he wouldn’t have taken the drug. 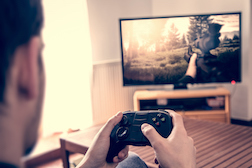 “When my son was prescribed Abilify for his bi-polar disorder it was the wonder drug at first, but it got to the point where it wasn’t helping,” says Nancy, a medical professional. In fact it made things a whole lot worse. “We first noticed the problem when he was in grade eight. He only wanted to play video games and his irritability increased. He wasn’t doing homework or chores, only gaming.”

Chances are, gambling could have been his addiction, especially living in Las Vegas. But minors aren’t allowed into casinos. Nancy says her son was always anti-drug and anti-alcohol and he was a straight-A student before taking the antipsychotic. And “he ran with the straight-A crowd”, but his friends were replaced with online gamers.

“One night I saw on TV a commercial about Abilify and compulsive behavior. My son’s behavior and the time he was prescribed the drug was so obvious, and I was so angry,” says Nancy. “I was angry because I had read everything on the Abilify Safety Info and Prescribing Info labels and I wasn’t aware of these side effects.”

Abilfy also interfered with her son’s relationship with his sister and his peers. Nancy says her kids were very close but the more he played video games, the further apart they became. “When he ignored my daughter she connected with others. Now he wants to reconnect but she has moved on with her life,” says Nancy. Same goes for his friends—they too moved on.

And there is the financial issue. Nancy’s health insurance changed. One month Abilify was $40 and the next month she had to pay the full amount: a whopping $800 for one month’s supply. “Do I pay the mortgage or the kid’s meds? Of course my children come first but it was hard during the economic downturn, and we have two incomes. What do people do who aren’t so fortunate financially?” she quips.

Besides the drug company’s failure to warn Nancy about her own son, she is angry for supporting the drug to others and potentially harming a child. “I am a licensed clinical social worker and my case loads are predominantly children,” she explains. “When I had a parent ask me whether I thought Abilify was safe—after their doctor had prescribed it to their child—I said yes. I told them I thought it was a safe medication and that my own kid takes it. “

Nancy has a lot more to be angry about. Her son (once the straight-A student) had to struggle through school and barely graduated. He missed out on the “Millenium Scholarship” that would have likely been his if not for Abilify.

“My other issue is that I know other families are struggling with the effects of this drug but they don’t know where to turn,” Nancy adds. “I called many law firms but they only deal with Abilify and gambling. So I welcome this opportunity to tell my story and maybe other parents will become aware: if there are enough of us, surely we can file an Abilify lawsuit on behalf of our children.”

Posted by
Edmond
on April 27, 2019
First, I would like to ask if this case of compulsive video gaming and abilify has been reported to FDA or not. In the 2016 FDA warning on association of impulse control disorder and abilify; compulsive gambling, shopping, sex and eating were specified. Though it also mentioned other impulsive or compulsive behaviour, compulsive/addictive video gaming was not specified in the warning. So, it is important to report 'new' association to FDA.
This said, have you got any medical expert witness to substantiate the association between compulsive video gaming and abilify? If yes, can you provide the name(s) of the medical experts? Thanks.
Posted by
Kelly Kane
on February 15, 2017
I was put on Abilify for atypical resistant depression and a hypo-manic episodes. I was told this was an off label us. i asked if it was safe. I was told it was. I asked what the side affects were no one told me that there were any side affects such as compulsive behavior or gambling and restless movements that I can't stop that have bothered me incessantly every night despite 3 my of
Requip, and a negative sleep study for restless legs.
I have stopped taking Abilify in 2016 when I read that it was harmful and could have side effects. I have become in the time since I began on Abilify a compulsive gambler, lost over $50,000 , my job, friend, my partner, compulsive over eater gained and lost over 100 pounds 2 or more times, a compulsive debtor, to the point where I now have a Representative payee holding my money because i am not considered responsible because I gamble my weekly money for food and essentials away. The money I get each week.
These things I can not stop. all came on at the same time as my beginning of taking Abilify.
I have a master,s degree , I lost my earning potential and became disabled at 38 due to this situation even though I just put the pieces together a few months ago. I did not know I could do anything. I lost any retirement I could have earned, had to go on SSDI, and live my life on disability due to addiction and side affects not know of told my the makers of Abilify. They told people in Europe put still didn't label my bottle. I have gone through tremendous financial loss, pain suffering, loss of functioning, been homeless, institutionalized over 20X, suicidal and assessed on record at least 20X. I could go on. There are pharmacy records from 2012-2016 that I was on Abilify. I came to understand this 3 months ago.