Abilify Gamblers, from Teens to Retirees

Anyone taking Abilify, from teens to retirees, is potentially at risk of compulsive or uncontrollable urges to binge eat, shop and have sex—and mostly to gamble. And this drug is particularly insidious: Abilify is prescribed to treat a mental disorder and chances are, that disorder prevents the patient from knowing about Abilify side effects. 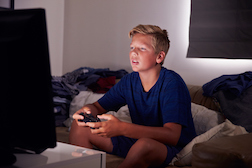 One parent told LawyersandSettlements in an email that their son was prescribed Abilify from Grade 8 through Grade 10 for bipolar disorder. During those years he became addicted to video games. “He went from a straight A student to a D student,” said his mother, Sara (not her real name). “He stole money from me to purchase online video games and played them all night; he stopped socializing and became irritable and argumentative.” When Sara took away the video games he attempted suicide with a kitchen knife and was hospitalized.

Sara says he was taken off Abilify in hospital and went to rehab for his addiction, but the damage was done—his grades never improved, nor did his social skills. As an adult, his employment opportunities are bleak.

More ABILIFY News
Leah retired this year at age 65, but she won’t be enjoying the “Golden Years” as planned. “It took 10 years to spend all my savings, mainly on lottery tickets and slot machines. I had never set foot in a casino until I started taking Abilify,” she says. “I had no idea that I was addicted to gambling until my sister came to visit. She knew this was completely out of character—then she saw an Abilify commercial on TV…”

Gambling wasn’t Leah’s only compulsive behavior. She went on crazy shopping sprees and gained “a ton” of weight. “My brain was in a fog, like it didn’t process the concept of spending money. And I never considered the repercussions,” she adds. Leah racked up a huge amount of debt, maxed out her credit cards and had to claim bankruptcy. “Even if I win an Abilify lawsuit it will never be enough to get me back on my feet again. More importantly, I hope my friends and family will understand that this drug is the cause of my addiction.”

Posted by
Francine Adams
on January 16, 2017
My developmentally disabled teenage niece started on Abilify & Lexapro in November 2015. She binge eats entire packages of food, 14 meals in less than 9 hrs., raw meat, uncooked pasta, frozen butter, etc. She would get up during the night and binge then get back in the bed and play possum when it's time for me to get her up for school. We now live with a padlock on the refrigerator. Her eating disorder is a hazard to her health.

I brought it up to her psychiatrist and he assured me that the medication was not causing it. I'm glad to know that I'm not the crazy one. There is a correlation between her eating disorder and the medication. She's only on 5 mg. once per day.

Posted by
MJ Woloshyniuk
on January 15, 2017
I'm just got my credit restored and my Doctor put me on Abilify for my Depression my Credit was the best in years!!! I started on a low dose and find a great significance of a difference then I was told to take a full pill then I started my shopping ???? sprees I was on top of the world ????

I'm had to have the best of the best!!! Reality wasn't real anymore I liked this feeling of responsibility/ caring about the payment for the bills at the end of the month seemed in the far shadows of mind!!!

When one card ???? max out I'd apply for another and cash ???? out my registered retirement funds account to pay for the bills???? This could only last for so long I'm out of my RRSP'S and claiming debt to the government of over 14k